HomeIndonesiaBest Photos of A Look at Life in Indonesia
Indonesia 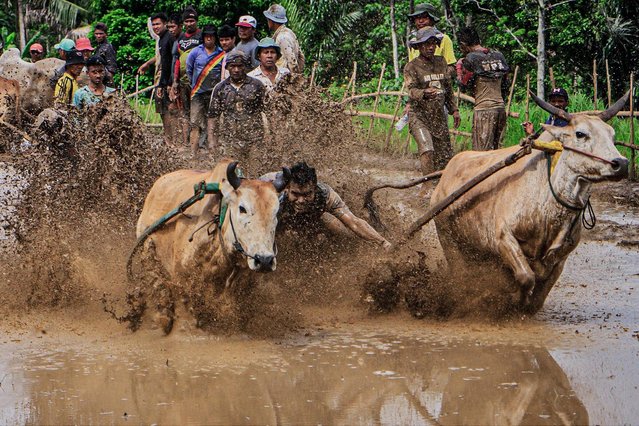 A man participates in a traditional Pacu Jawi cow race at Nagari Labuah, in Tanah Datar of West Sumatra, Indonesia, February 12, 2022. The Pacu Jawi is held annually in muddy rice fields to celebrate the end of the harvest season. (Photo by Xinhua News Agency/Rex Features/Shutterstock) 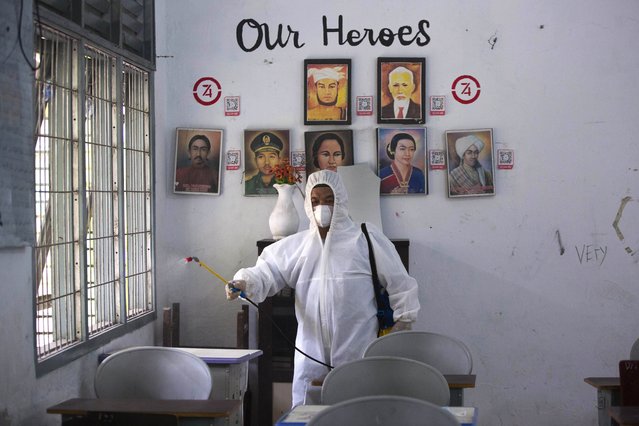 A worker sprays disinfectant inside an empty classroom during a pause after a case of COVID-19 was found at a school Medan, North Sumatra, Indonesia, Friday, February 11, 2022. Indonesia is bracing for a third wave of COVID-19 infections as the highly transmissible omicron variant drives a surge in new cases. (Photo by Binsar Bakkara/AP Photo) 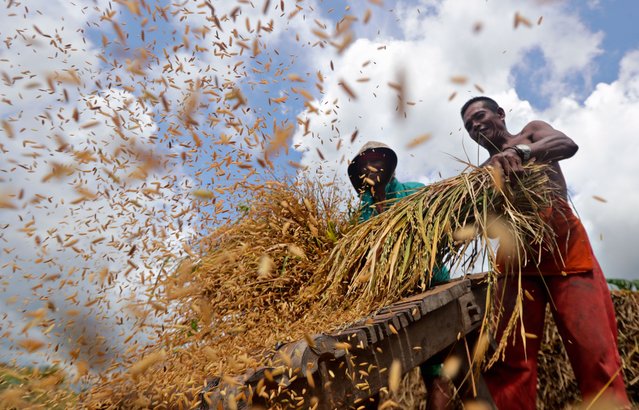 Farmers harvest rice at fields in Bogor, Indonesia, 16 February 2022. The National Logistics Agency estimates that rice prices will increase caused by several factors, such as the hydrometeorological disaster that occurred in early 2022 and also the high demand for rice from the community along with the increasing number of cases of Covid-19 Cmicron variant cases in Indonesia. (Photo by Adi Weda/EPA/EFE) 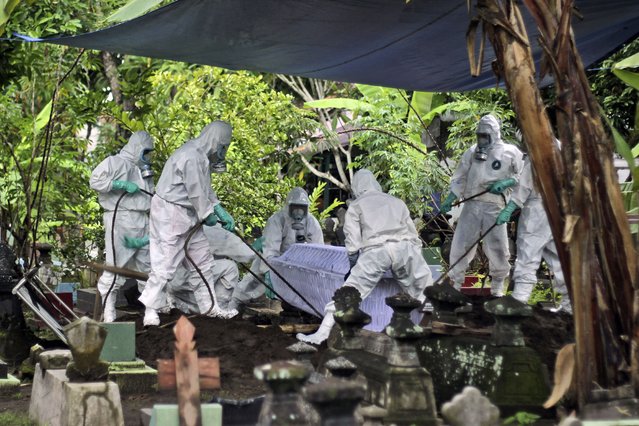 Workers in protective suits bury a coronavirus victim during a funeral at a cemetery in Yogyakarta, Indonesia, Thursday, February 17, 2022. (Photo by Slamet Riyadi/AP Photo) 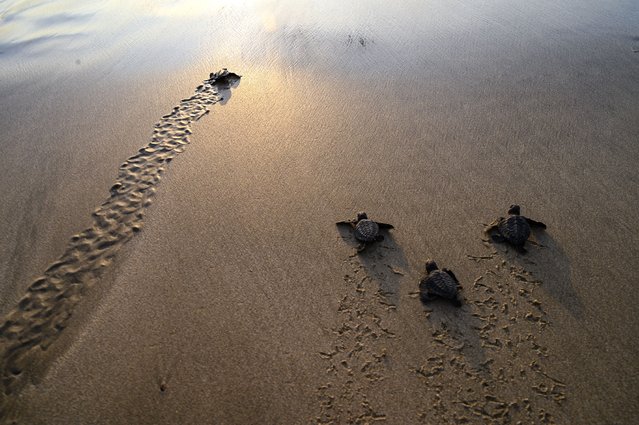 Baby sea turtles heads towards the sea during the sunset at Lhoknga beach in Aceh province on February 21, 2022. (Photo by Chaideer Mahyuddin/AFP Photo) 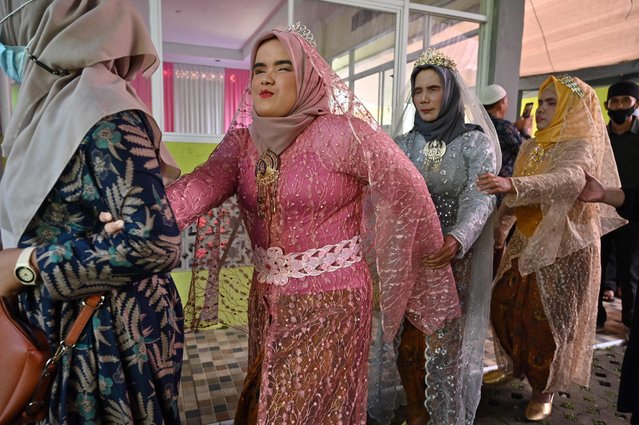 Visually-impaired brides lead each other as they enter a wedding hall during a mass marriage for ten couples with the disability on the “22-2-22” palindrome day in Bogor on February 22, 2022. (Photo by Adek Berry/AFP Photo) 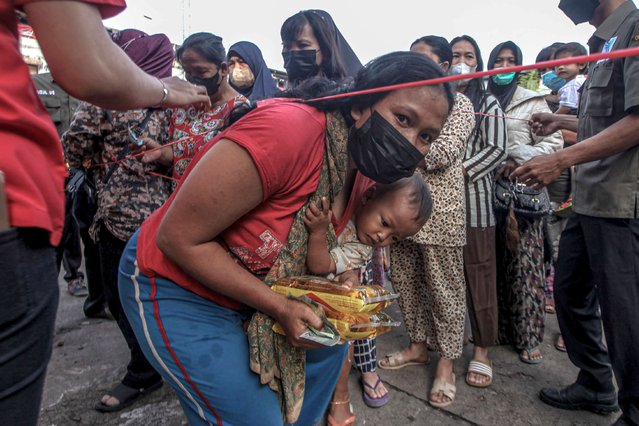 Hundreds of people line up to get cooking oils at a slum area in Palembang, Indonesia on February 24, 2022. The cheap market help people get cooking oil due to the scarcity of stock and the high price of packaged cooking oil in a number of regions in Indonesia. (Photo by Muhammad A.F/Anadolu Agency via Getty Images) 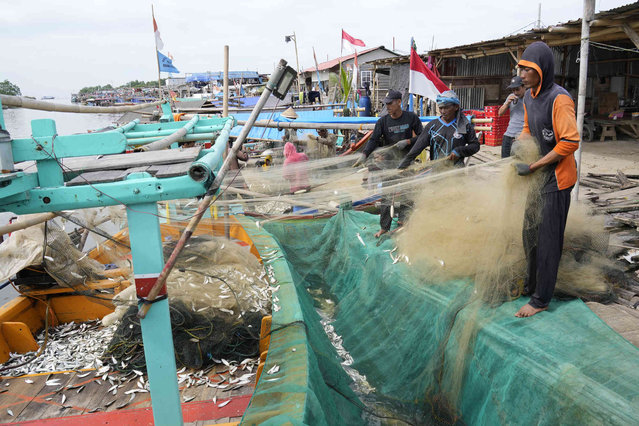 Fisherman remove fish from nets after returning from a fishing trip on their boat in Jakarta, Indonesia, Thursday, February 24, 2022. (Photo by Achmad Ibrahim/AP Photo) 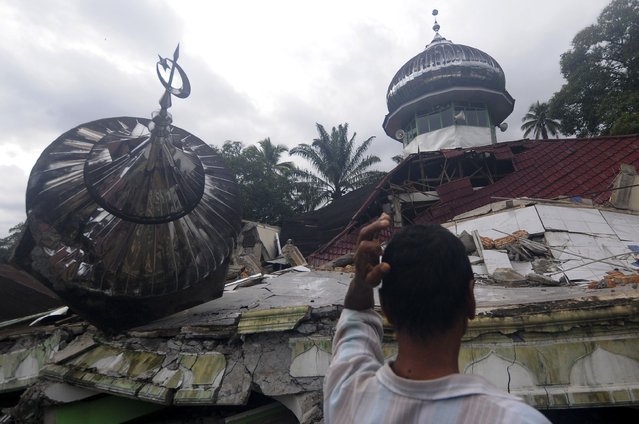 A man inspects the ruin of a damaged mosque after an earthquake in West Pasaman district, West Sumatra, Indonesia, Friday, February 25, 2022. The strong and shallow earthquake shook Sumatra on Friday, killing a number of people while causing panic on the island and in neighboring Malaysia and Singapore. (Photo by Ardhy Fernando/AP Photo) 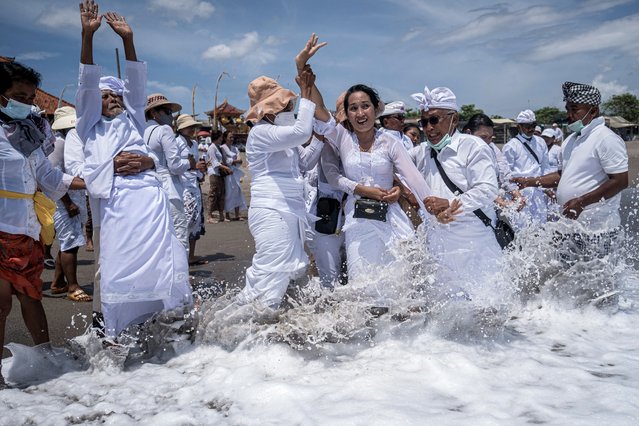 Balinese Hindus woman in a state of trance, dances as she attend the Melasti Ritual prior to Nyepi Day on February 28, 2022 on a beach in Canggu, Bali, Indonesia. Balinese Hindus dressed in predominantly white attire carried sacred effigies of gods and goddesses and ritual paraphernalia from their village temples to the beach to perform a purification ceremony called the Melasti ritual. Balinese Hindus believe the Melasti ritual is a must perform ahead of Nyepi Day, The Day of Silence, to cleanse the soul and nature, recharge the supernatural power of the temples sacred objects and cleanse the temple paraphernalia. The Nyepi Day is a national holiday in Indonesia and is a day for self-reflection and abstaining from distractions such as entertainment. (Photo by Agung Parameswara/Getty Images) 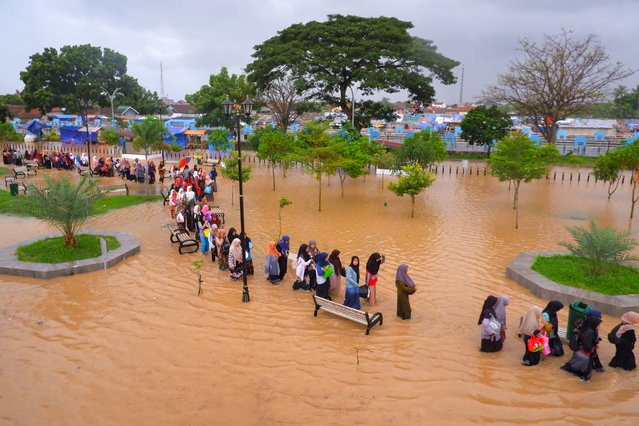 People wade floodwaters as they evacuate after floods in Serang, Banten province on March 1, 2022. (Photo by Dziki Oktomauliyadi/AFP Photo) 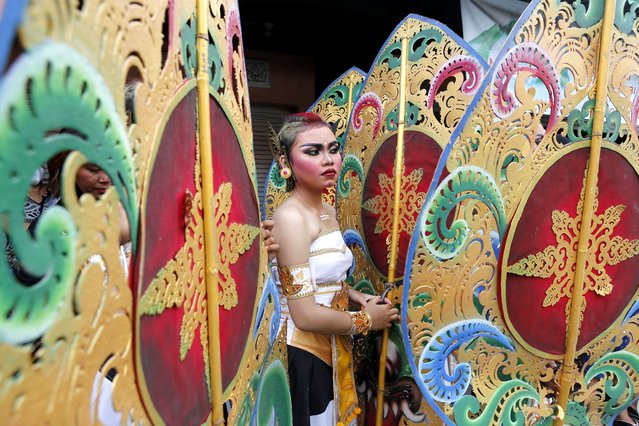 A woman dancer prepare a performance during Nyepi celebration, the annual day of silence marking Balinese Hindu new year in Bali, Indonesia on Wednesday, March 2, 2022. Most Balinese practice self-reflection and stay at home to observe the quiet holiday, and tourists visiting the island are asked not to leave their hotels and the airport will be closed. (Photo by Firdia Lisnawati/AP Photo) 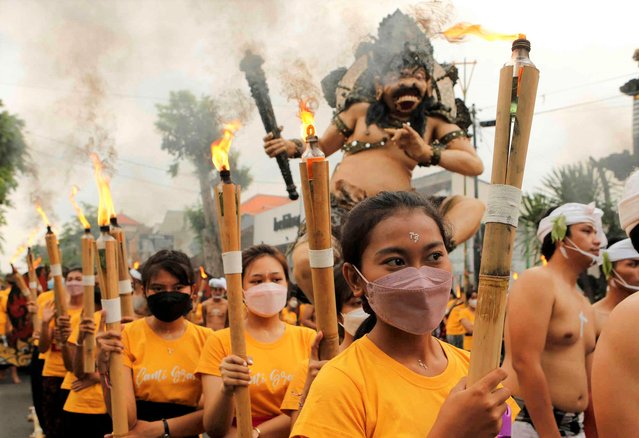 Women carrying torches line up in front of a giant effigy locally known as “ogoh-ogoh” that represents evil spirits during Nyepi celebration, the annual day of silence marking Balinese Hindu new year in Bali, Indonesia on Wednesday, March 2, 2022. Most Balinese practice self-reflection and stay at home to observe the quiet holiday, and tourists visiting the island are asked not to leave their hotels and the airport will be closed. (Photo by Firdia Lisnawati/AP Photo) 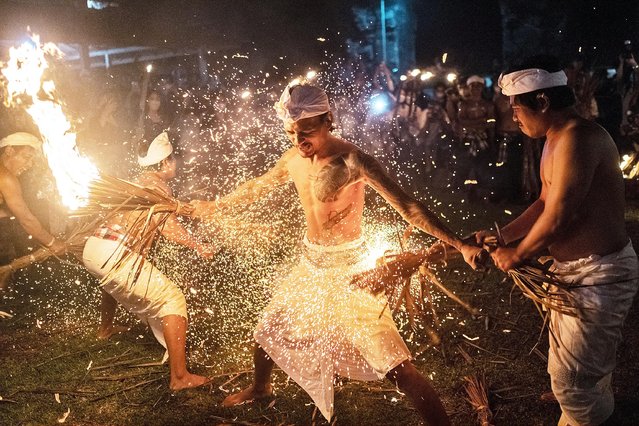 A Balinese man is hit with burning dried coconut leaves during a fire fight ritual called Lukad Gni as pengerupukan ceremony on March 02, 2022 in Paksebali Village, Klungkung, Bali, Indonesia. The pengerupukan ceremony, held ahead of Nyepi Day celebrations, is a unique ritual in which devotees “fight” each other with fire. The Puri Satria Kawan community believes that the Lukat Gni ritual is conducted to purify the microcosmos (bhuana alit) and macrocosmos (bhuana agung), which is believed to neutralize negative energy and maintain the universe’s harmony. (Photo by Agung Parameswara/Getty Images) 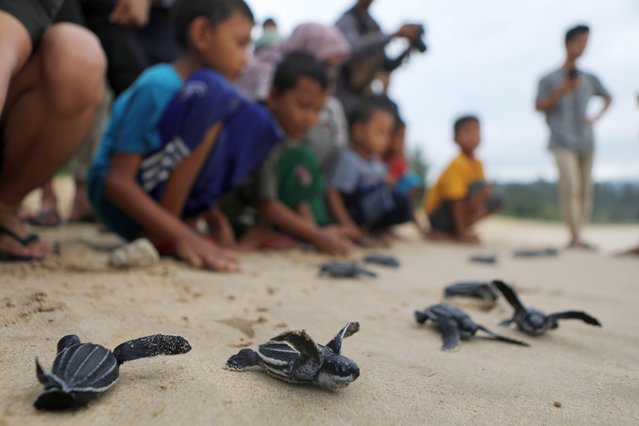 Volunteers from the local community release baby turtles, known as “tukik” locally, into the sea in Lampuuk beach, Aceh Besar, Indonesia, 02 March 2022. The baby turtles were released into the sea as part during a campaign for turtle protection as part of conservationists’ efforts to boost the population of an endangered species and promote environmental protection among local people which often hunt the egg to consume and to sell. (Photo by Hotli Simanjuntak/EPA/EFE) 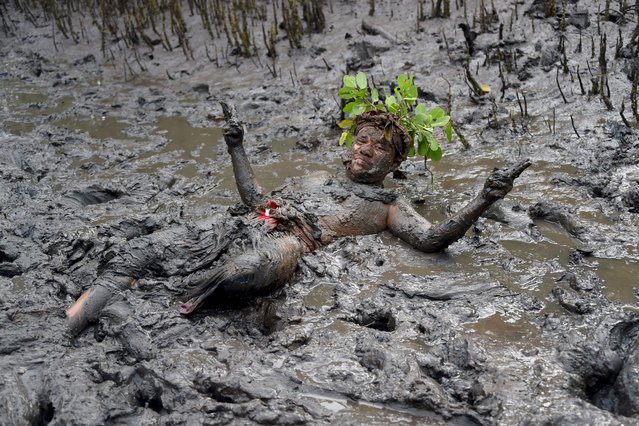 A man takes part in a mud bath tradition, known as Mebuug-buugan, held a day after Nyepi – the Balinese “Day of Silence” – aimed at neutralising bad traits, in the village of Kedonganan on Indonesia’s resort island of Bali on March 4, 2022. (Photo by Sonny Tumbelaka/AFP Photo) 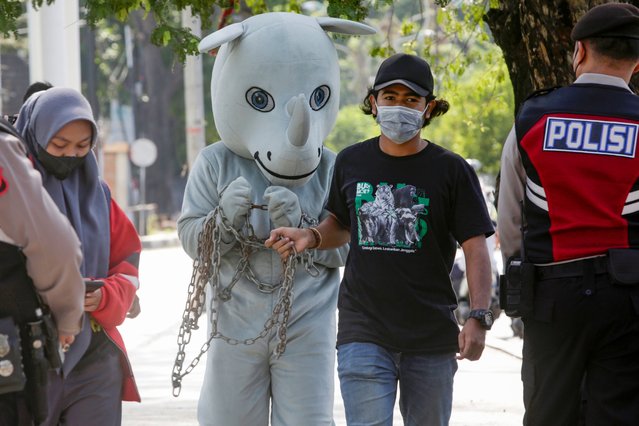