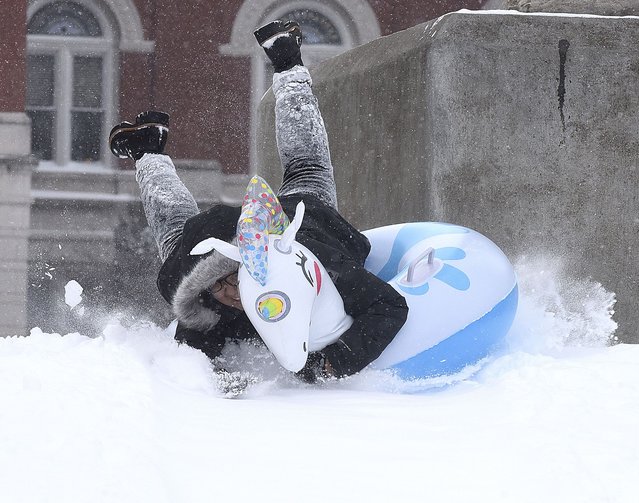 University of Missouri freshman Arely Ochoa from Branson takes a tumble while riding “Peggy” and inflatable unicorn on Wednesday February 2, 2022, in front of the columns at Jesse Hall on the University of Missouri campus, in Columbia, Mo. A winter storm dumped about seven inches of snow according to the National Weather Service in St. Louis. (Photo by Don Shrubshell/Columbia Daily Tribune via AP Photo) 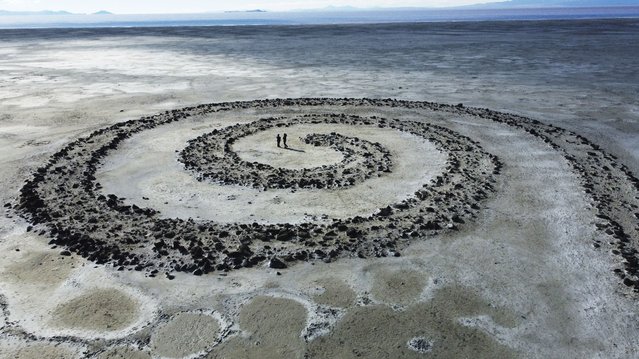 The Great Salt Lake is shown in the background of the earthwork Spiral Jetty by Robert Smithson Tuesday, February 1, 2022, on northeastern shore of the Great Salt Lake near Rozel Point in Utah. Last year the Great Salt Lake matched a 170-year record low and kept dropping, hitting a new low of 4,190.2 feet (1,277.2 meters) in October. (Photo by Rick Bowmer/AP Photo) 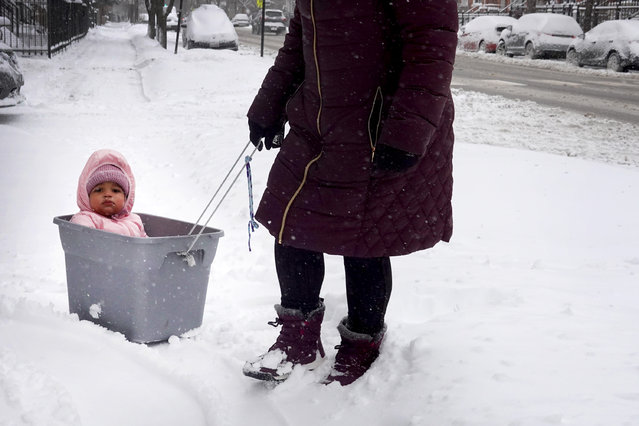 Olia is taken on a tour of her snow-covered neighborhood by her nanny on February 02, 2022 in Chicago, Illinois. A massive storm, working its way across the Midwest, is expected to dump as much as 16 inches of snow in some areas. Chicago is expected to receive between 4 and 8 inches by the time the system passes tomorrow afternoon. (Photo by Scott Olson/Getty Images) 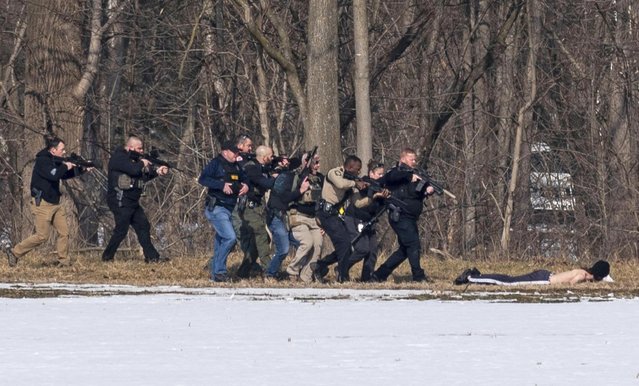 Police approach a suspect on the bank of the North River in Bridgewater, Virginia on February 1, 2022, after two campus police officers were shot at a college. (Photo by Daniel Lin/Daily News-Record via the AP Photo) 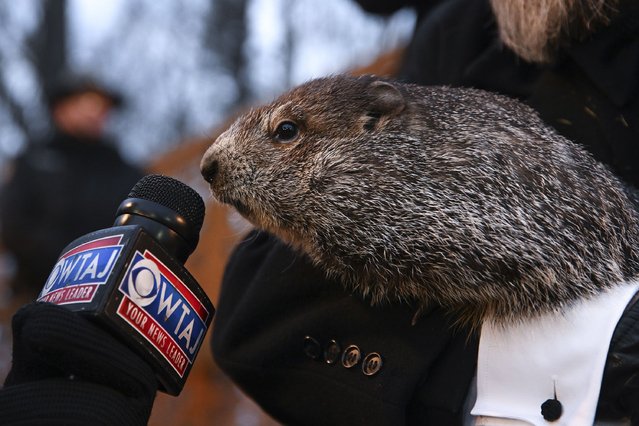 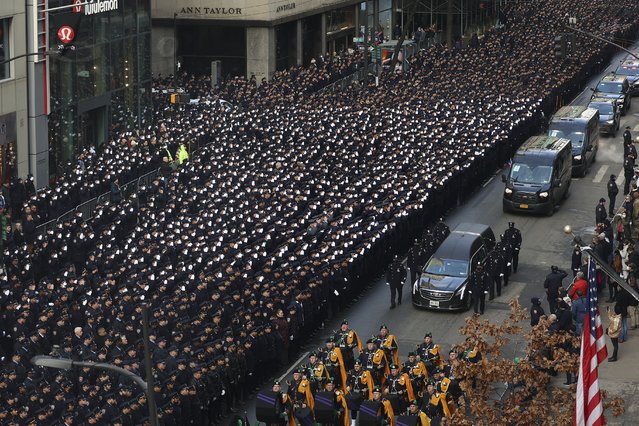 New York Police salute as a hearse carrying the casket of NYPD Officer Wilbert Mora is escorted down Fifth Avenue as it departs from St. Patrick’s Cathedral after a funeral service for Mora, Wednesday, February 2, 2022, in New York. For the second time in under a week, police converged on New York City’s St. Patrick’s Cathedral to pay tribute to a young officer gunned down while answering a call for help in Harlem. Mora was shot along with Officer Jason Rivera on Jan. 22 while responding to a call about a domestic argument in an apartment. (Photo by Yuki Iwamura/AP Photo) 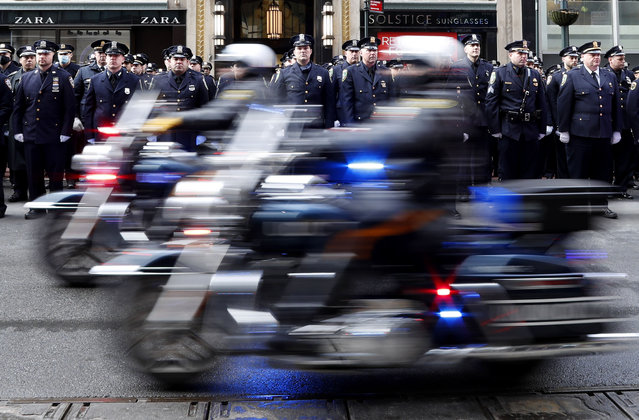 Police officers on motorcycles move down Fifth Avenue surrounded by thousands of police officers on Fifth Avenue as part of the funeral precession for fallen NYPD Police Officer Wilbert Mora after funeral services at St. Patrick’s Cathedral in New York City on Wednesday, February 2, 2022. Officers Wilbert Mora and Jason Rivera were gunned down in an ambush on a domestic violence call at a Harlem apartment. (Photo by John Angelillo/UPI/Rex Features/Shutterstock) 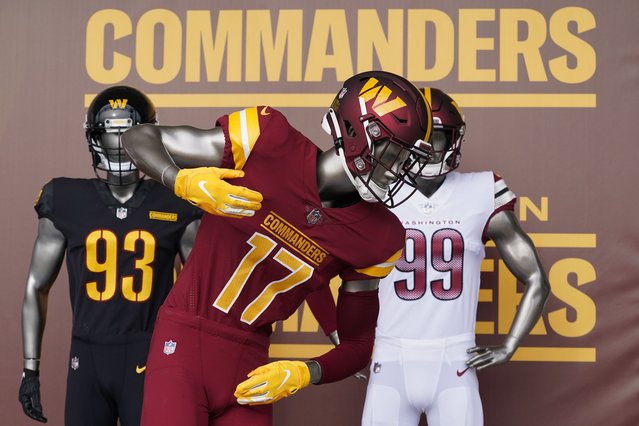 Washington Commanders jerseys are displayed at an event to unveil the NFL football team’s new identity, Wednesday, February 2, 2022, in Landover, Md. The new name comes 18 months after the once-storied franchise dropped its old moniker following decades of criticism that it was offensive to Native Americans. (Photo by Patrick Semansky/AP Photo) 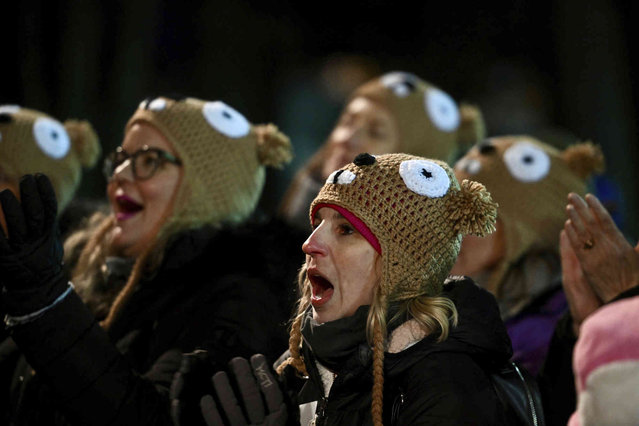 Ashley Johnson of Dallas watches entertainment while waiting for Punxsutawney Phil, the weather prognosticating groundhog, to come out and make his prediction during the 136th celebration of Groundhog Day on Gobbler’s Knob in Punxsutawney, Pa., Wednesday, February 2, 2022. Johnson traveled from Texas to Punxsutawney with members of her book club. Phil’s handlers said that the groundhog has forecast six more weeks of winter weather during this year’s event. (Photo by Barry Reeger/AP Photo) 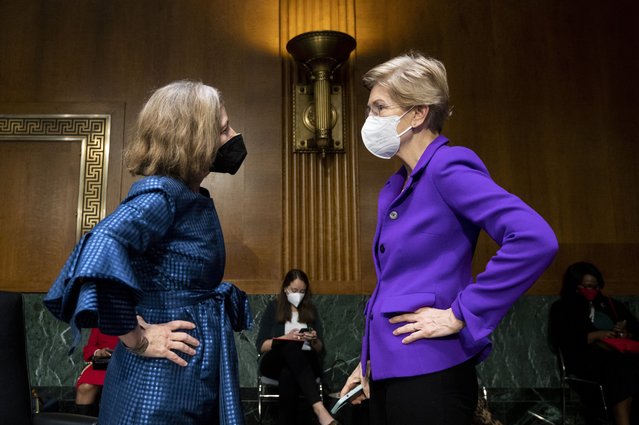 Sen. Elizabeth Warren, D-Mass., right, talks with Sarah Bloom Raskin, a nominee to be the Federal Reserve’s Board of Governors vice chair for supervision, the nation’s top bank regulator, before a Senate Banking, Housing and Urban Affairs Committee confirmation hearing on Thursday, February 3, 2022, in Washington. (Photo by Bill Clark/Pool via AP Photo) 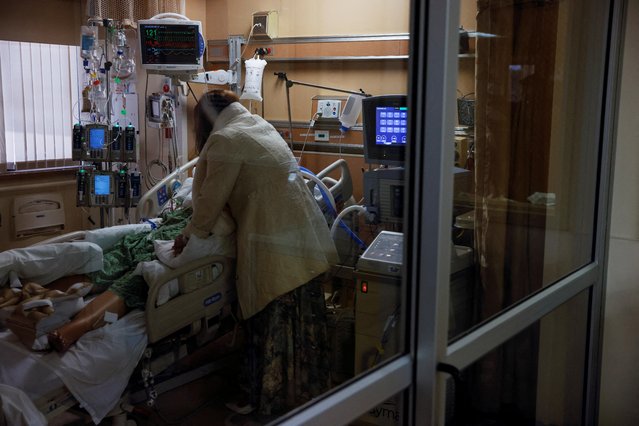 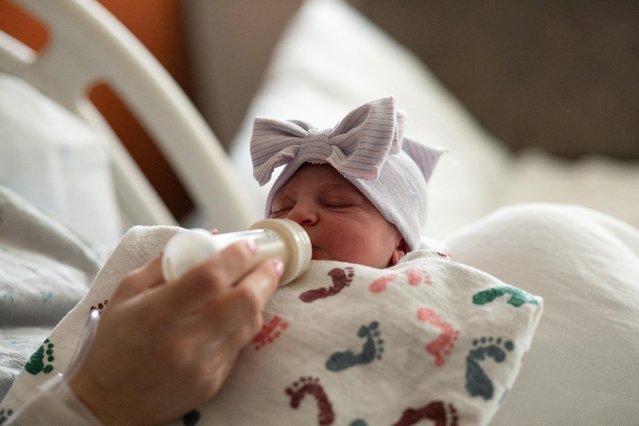 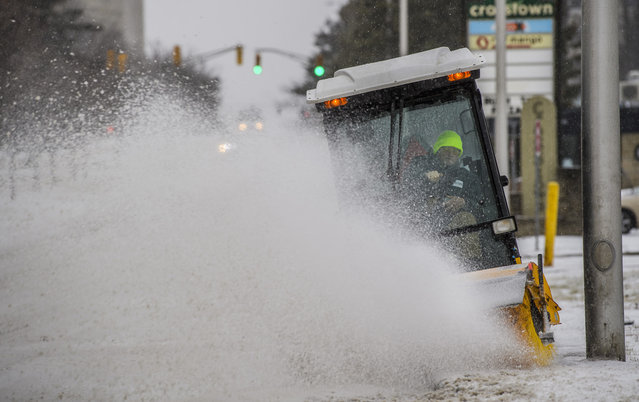 A man plows the sidewalks along 10th Street in Bloomington, Ind.,on Thursday, February 3, 2022. A major winter storm with millions of Americans in its path is spreading rain, freezing rain and heavy snow further across the country. (Photo by Rich Janzaruk/The Herald-Times via AP Photo)