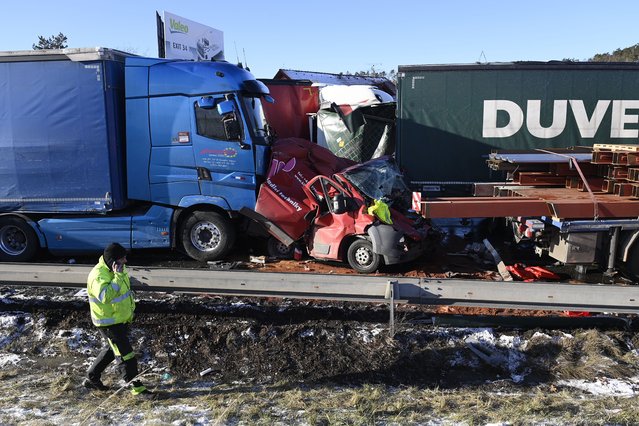 Six people were injured in a crash of 36 vehicles on a highway D5 near Zebrak in Beroun Region, Czech Republic, on Thursday, January 20, 2022. The police is investigating the cause of the accident, bad weather is being taken into account. (Photo by Ondrej Deml/CTK via AP Photo) 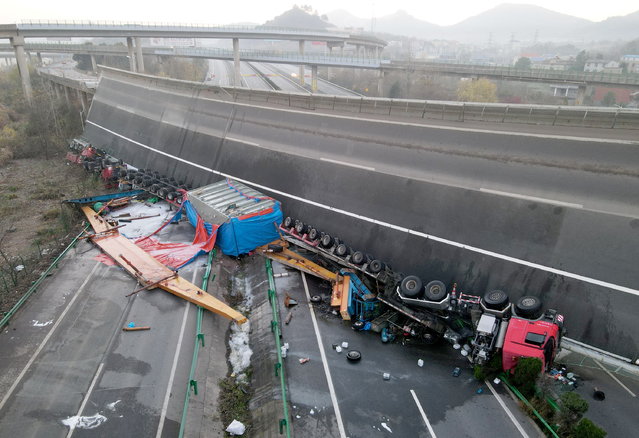 Overturned vehicles are seen at the site where a highway flyover collapsed in Ezhou, Hubei province, China on December 19, 2021. Picture taken with a drone. (Photo by Cnsphoto via Reuters) 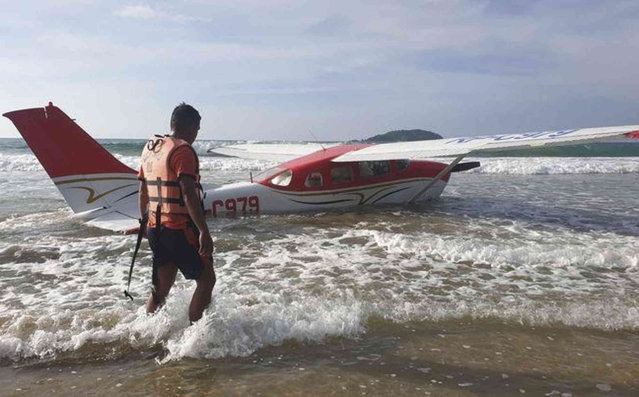 In this handout photo provided by the Philippine Coast Guard District Palawan, a rescuer walks beside a Cessna 206 plane carrying two pilots and 25 boxes of live fish after it crash-landed Friday December 10, 2021, on the shoreline near the resort town of El Nido in western Palawan province, Philippines, due to engine trouble, civil aviation officials said. Philippine coast guard personnel rescued the two pilots from the floating aircraft near the beach, where the private plane ditched after taking off from San Vicente town in Palawan on a domestic flight to Sangley airport in Cavite province south of Manila. (Photo by Philippine Coast Guard District Palawan via AP Photo) 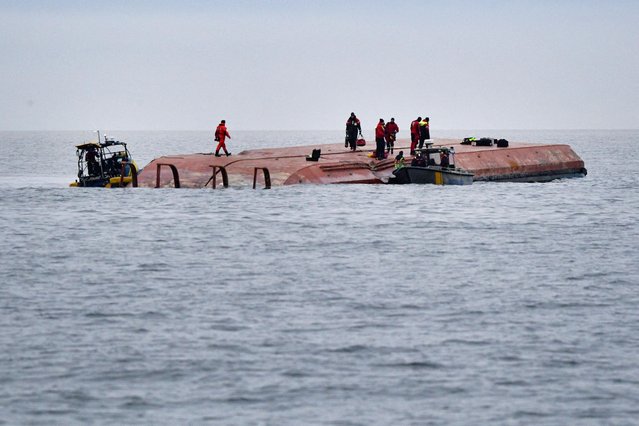 Divers and members of a sea rescue team work on the capsized Danish cargo ship Karin Hoej which collided with the British cargo ship Scot Carrier on the Baltic Sea between the Swedish city of Ystad and the Danish island of Bornholm, on December 13, 2021. Two people were missing after the two cargo ships collided in the early morning hours, the Swedish Maritime Administration said. (Photo by Johan Nilsson/TT News Agency/AFP Photo) 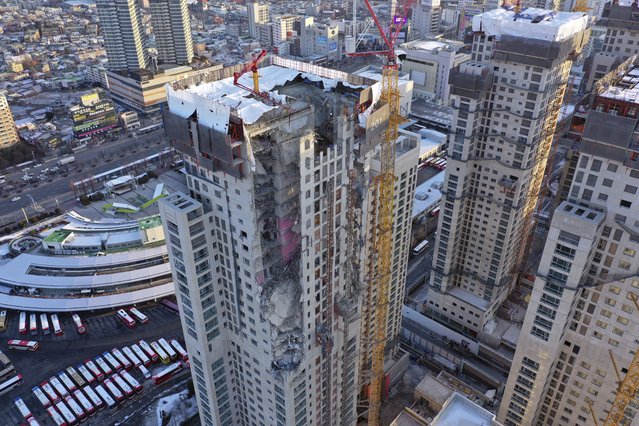 A collapsed section of an exterior wall hangs on the upper floors of an apartment under construction in Gwangju, South Korea, Wednesday, Janury 12, 2022. South Korean rescuers on Wednesday resumed their search for six missing construction workers believed to be trapped at the construction site. (Photo by Jung Hee-sung/Yonhap via AP Photo) 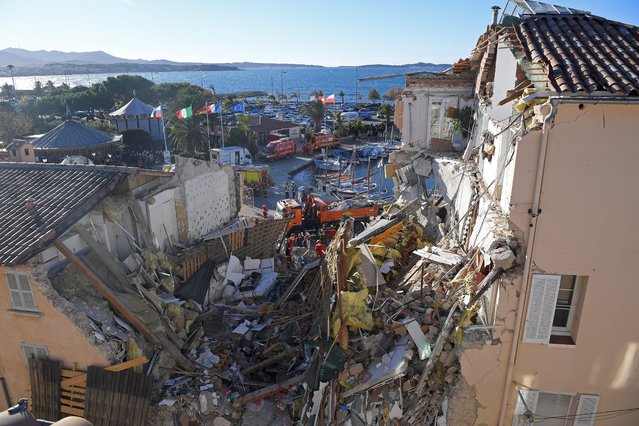 French firefighters search the rubble for missing inhabitants after a building collapsed in Sanary-sur-Mer, on December 7, 2021. Five people are “probably trapped in the rubble” of a three-story apartment building that collapsed overnight in Sanary-sur-Mer, Var, following an explosion that may have been caused by a gas problem, according to the firefighters. (Photo by Nicolas Tucat/AFP Photo) 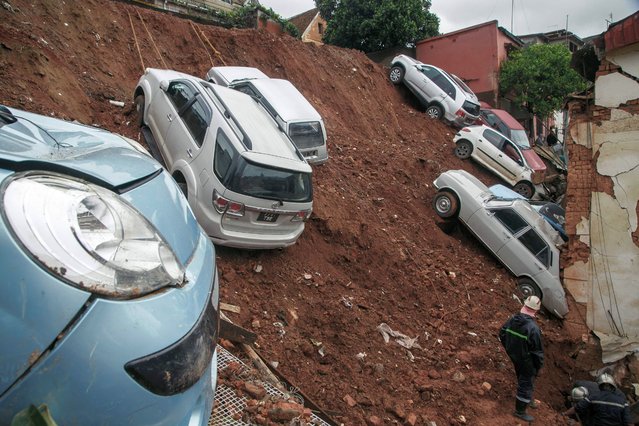 A general view of a car park housing several private cars collapsed on houses following the heavy rains of the last few days in the Ankadifotsy neighbourhood of Antananarivo on January 24, 2022. Rescuers recovered five bodies (four children and one adult) from the rubble and are still looking for two missing people who were startled by the landslide in their sleep. Antananarivo and several regions of Madagascar have been hit by strong tropical storms that have caused 34 deaths and more than 62,000 people affected, according to the authorities. (Photo by Rijasolo/AFP Photo) 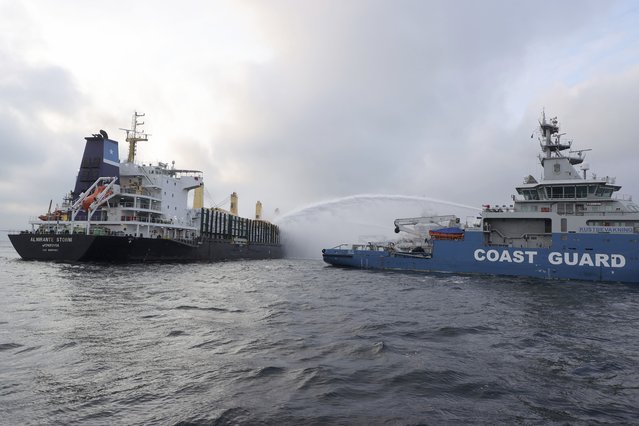 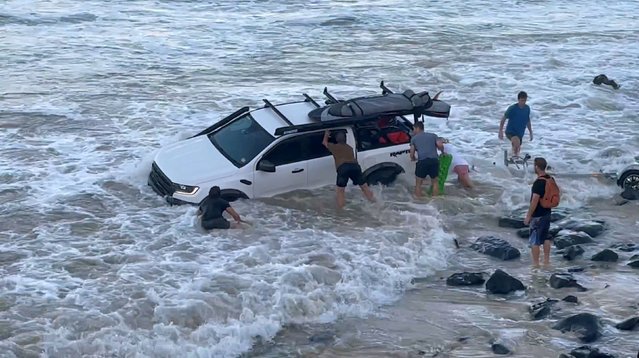 People try to prevent a car stranded in strong waves from toppling over in Queensland, Rainbow Beach, Australia on January 3, 2022. (Photo by Bruce Howe/Reuters) 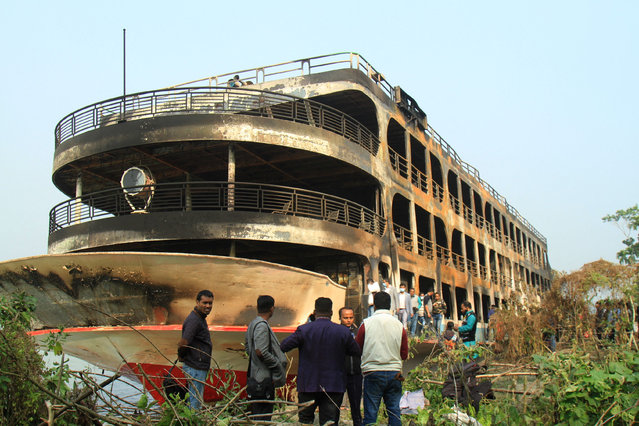 People look at the burnt-out ferry as it is anchored along a coast a day after it caught on fire killing at least 37 people in Jhalkathi, 250 kilometres (160 miles) south of Dhaka, on December 24, 2021. (Photo by Arifur Rahman/AFP Photo) 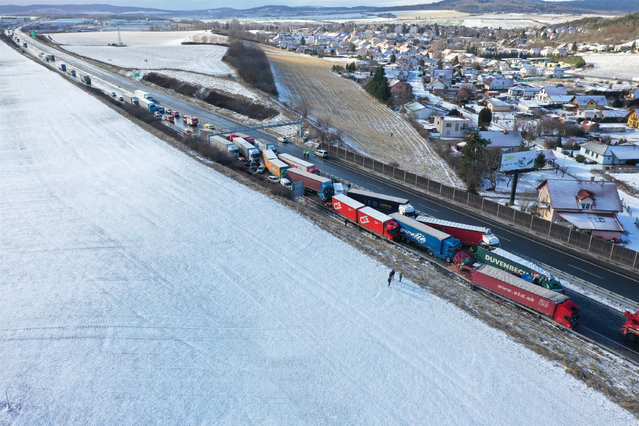 The D5 motorway on the 33rd kilometre in the direction to Prague near the village of Zebrák was blocked by a mass traffic accident of up to forty cars after 11 o’clock on Thursday 20th January 2022. Police closed both directions of the motorway due to the landing of a rescue helicopter. (Photo by David Malik/CNC/Profimedia/Rex Features/Shutterstock) 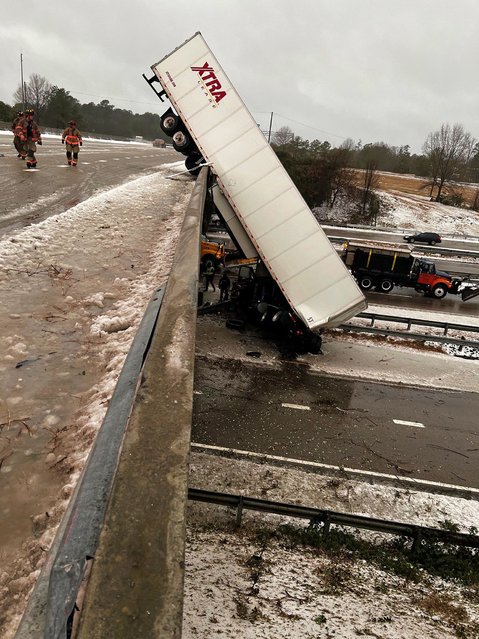 In this photo provided by the Durham Police Department, a truck hangs from the highway N.C. 147 overpass after its cab apparently slid off the highway during winter weather, Sunday, January 16, 2022, in Durham, N.C. The cab of the truck appeared to have landed upright on Highway 15-501 below, while the trailer was in a vertical position, from the bridge to the highway below, causing road closures. (Photo by Durham Police Department via AP Photo)