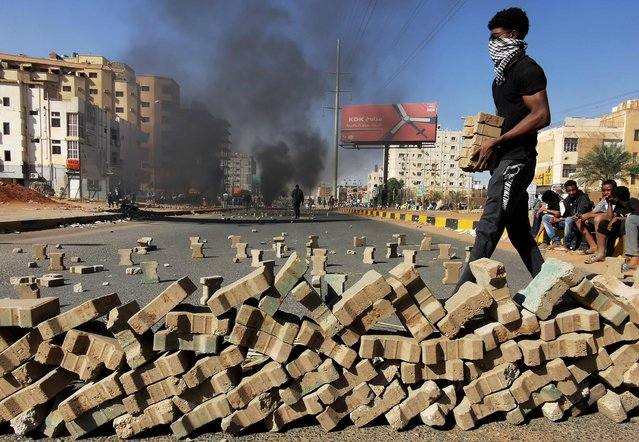 Protesters use bricks to block a street in the Sudanese capital Khartoum, during a demonstration against the killings of dozens in a crackdown since last year’s military coup, as US diplomats pressed for an end to the violence, on January 20, 2022. The demonstrations were the latest since the October 25 coup led by General Abdel Fattah al-Burhan, which derailed a civilian-military power-sharing deal negotiated in the wake of the 2019 ouster of autocrat Omar al-Bashir. (Photo by Ashraf Shazly/AFP Photo) 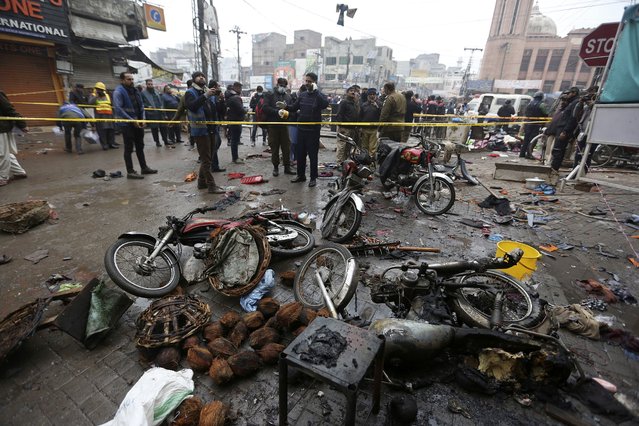 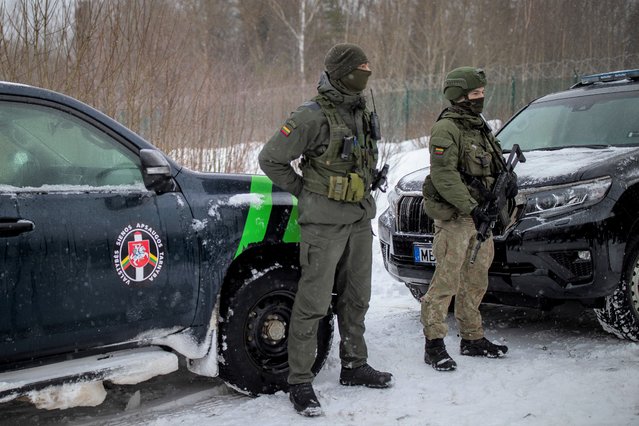 Members of the Lithuania State Border Guard Service and Lithuanian army soldiers patrol on the border with Belarus during a visit by participants of the Conference on Border Management near the village Kurmelionys, some 40km (24 miles) east of the capital Vilnius, Lithuania, Friday, January 21, 2022. The conference main objective is to discuss issues of fundamental importance in an open and informal way and to find common denominators on the issues of the protection of external borders, the response to hybrid attacks and the elimination of abuses of the EU asylum system. (Photo by Mindaugas Kulbis/AP Photo) 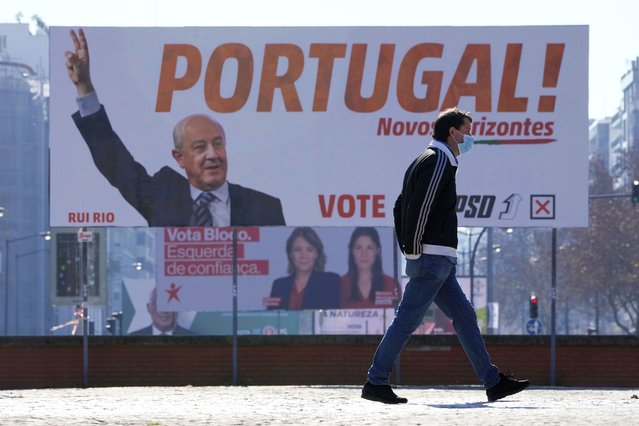 A man wearing a face mask walks past election campaign billboards in Lisbon, Thursday, January 20, 2022. Portugal’s government is under fire over its preparations for people infected with COVID-19 to vote in an upcoming snap election, as officials struggle to square the constitutional right to vote with a duty of care for public health. Eligible voters who are infected and confined at home – as many as 600,000 people on the day of the Jan. 30 election, officials estimate – are to be allowed to go to polling stations as an exceptional measure, the government announced Thursday. (Photo by Armando Franca/AP Photo) 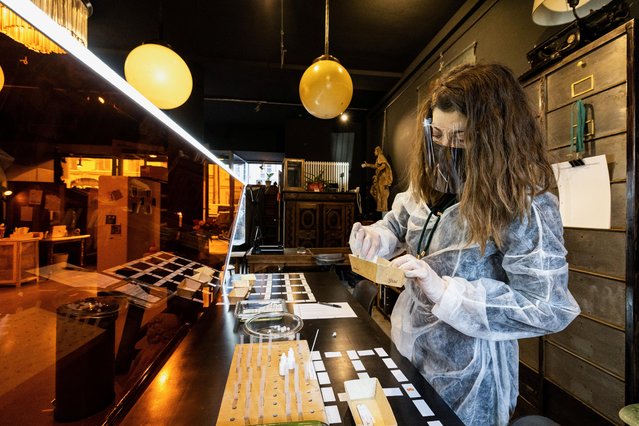 Judith Johanna Pawelke processes a coronavirus disease (COVID-19) test in her interior design store, which is currently being used as a COVID-19 test station in downtown Munich, Germany, January 19, 2022. (Photo by Lukas Barth/Reuters) 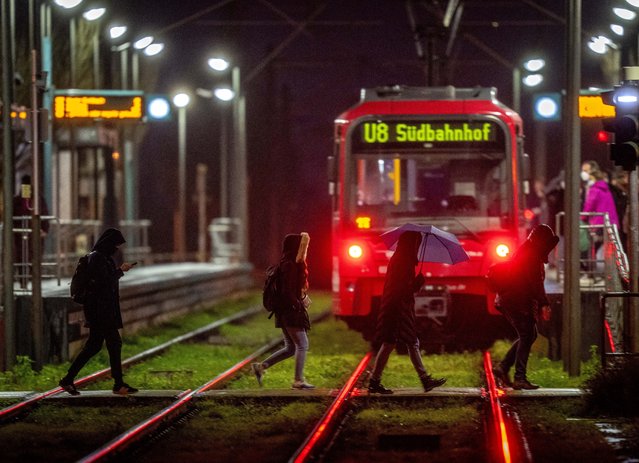 People rush to a train at a subway station in Frankfurt, Germany, Thursday, January 20, 2022 as the daily number of COVID-19 infections are rising again. (Photo by Michael Probst/AP Photo) 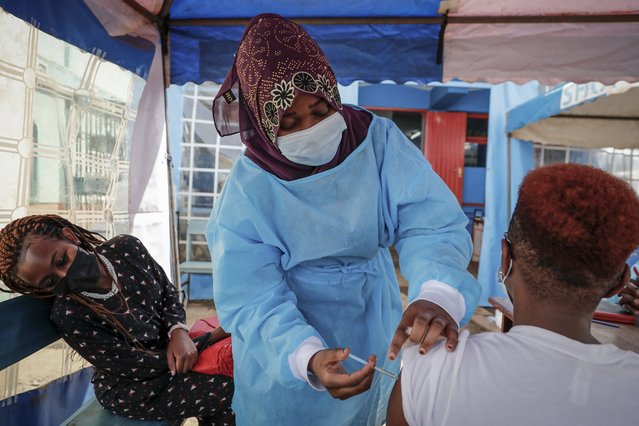 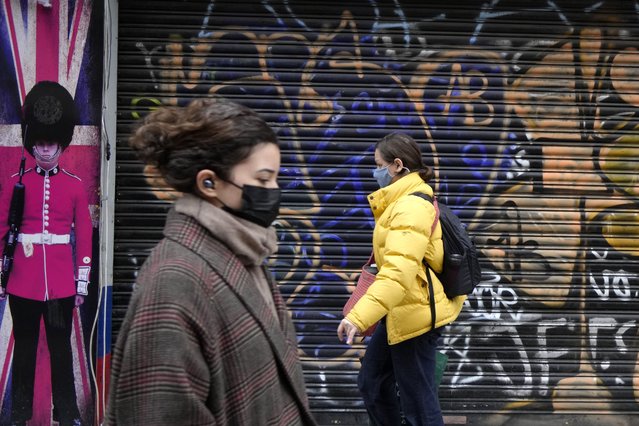 A shopper passes a closed shop on Oxford Street in London, January 10, 2022. In the United Kingdom, mask-wearing in public places and COVID-19 passports will be dropped on Jan. 26, Prime Minister Boris Johnson announced Wednesday, Jan. 19, saying that the latest wave had “peaked nationally”. (Photo by Kirsty Wigglesworth/AP Photo/File) 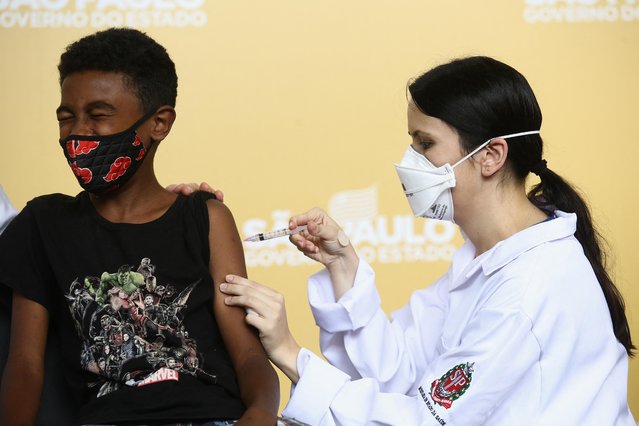 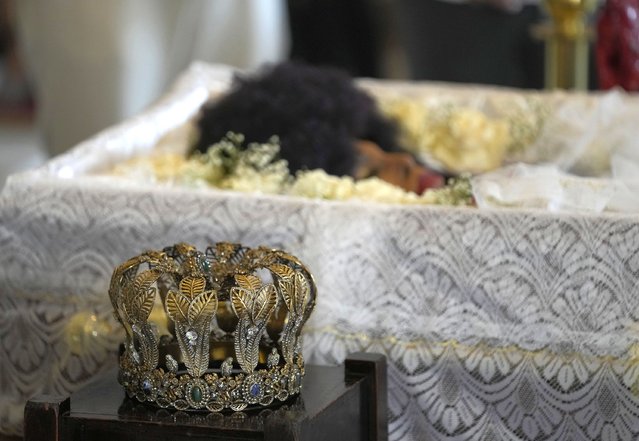 A crown sits on display next to the body of Brazilian samba singer Elza Soares as she lies in state at the Municipal Theater in Rio de Janeiro, Brazil, Friday, January 21, 2022. Soares died at age 91 of natural causes in her Rio de Janeiro home on Thursday afternoon, family members said on the artist’s official Instagram account. (Photo by Silvia Izquierdo/AP Photo) 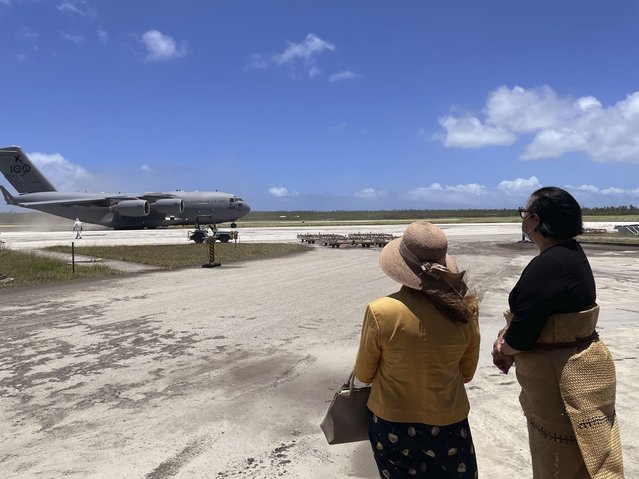 In this photo provided by the Australian Defence Force, the Tongan Foreign Minister, Fekitamoeloa ‘Utoikamanu, right, and the Australian High Commissioner to Tonga, Rachael Moore, watch the arrival of the first Royal Australian Air Force C-17A Globemaster III aircraft at Fua’amotu International Airport near Nukuʻalofa, Tonga, Thursday, January 20, 2022. The first flights carrying fresh water and other aid to Tonga were finally able to land after the Pacific nation’s main airport runway was cleared of ash left by a huge volcanic eruption. (Photo by Australian Defence Force via AP Photo) 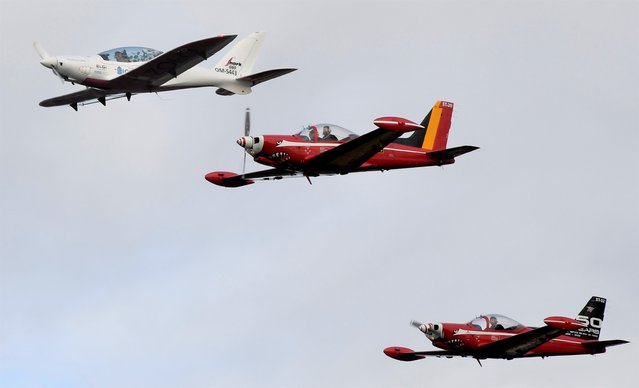 Belgium-British teenage pilot Zara Rutherford, left, is escorted as she flies her Shark ultralight plane, center, over the Kortrijk airport in Kortrijk, Belgium, Thursday, January 20, 2022. The 19-year-old Belgium-British pilot Zara Rutherford is set for a world record as the youngest woman to fly solo around the world, touching her small airplane down in western Belgium on Thursday, 155 days after she departed. Rutherford will find herself in the Guinness World Records book after setting the mark that had been held by 30-year-old American aviator Shaesta Waiz since 2017. (Photo by Geert Vanden Wijngaert/AP Photo) 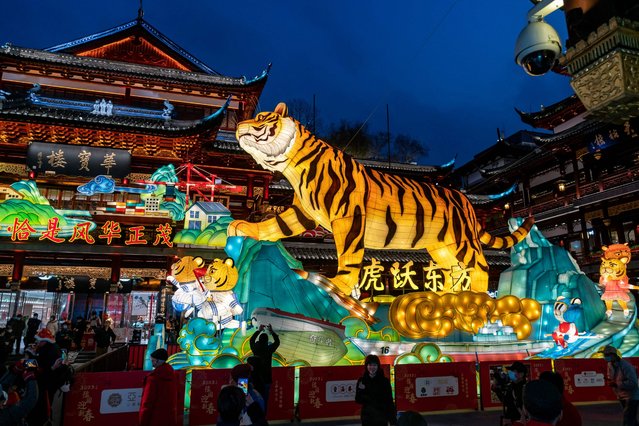 This photo taken on January 19, 2022 shows people watching a lantern of tiger at a lantern show in Yuyuan Garden in Shanghai, ahead of the Lunar New Year. (Photo by AFP Photo/China Stringer Network) 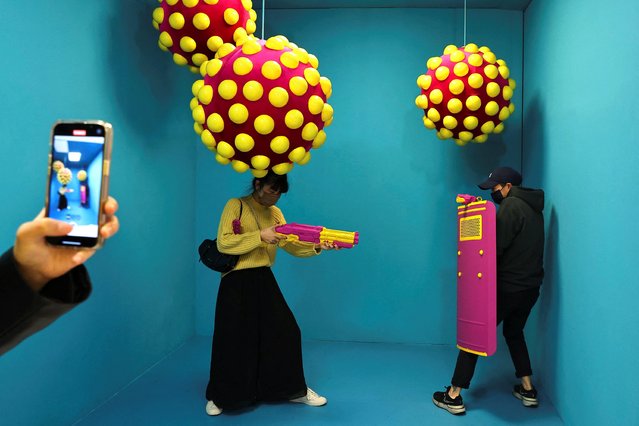 Visitors pose with props at the COVID-19 themed room at Gaki Hip, a pop up museum using everyday objects in Taiwan, such as bubble tea, claw-machines and pineapples, to encourage visitors to rethink the definition of Taiwan’s culture in Taipei, Taiwan on January 20, 2022. (Photo by Ann Wang/Reuters)