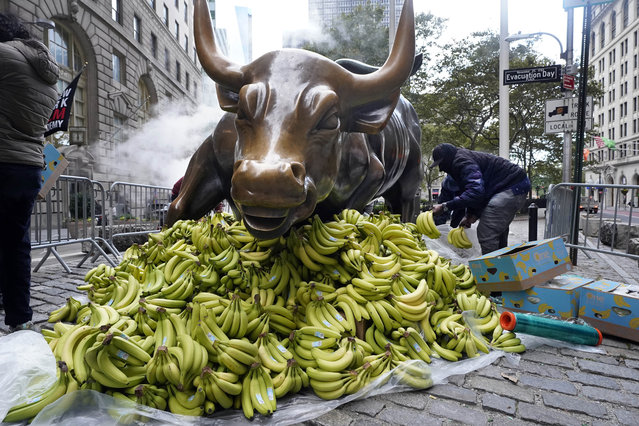 Bananas are placed at the base of Arturo Di Modica’s “Charging Bull” in New York’s Financial District, Monday, October 18, 2021. The bananas are part of a protest against wealth disparity by Sapien.Network, who says that the fruit will be distributed to local food banks. (Photo by Richard Drew/AP Photo) 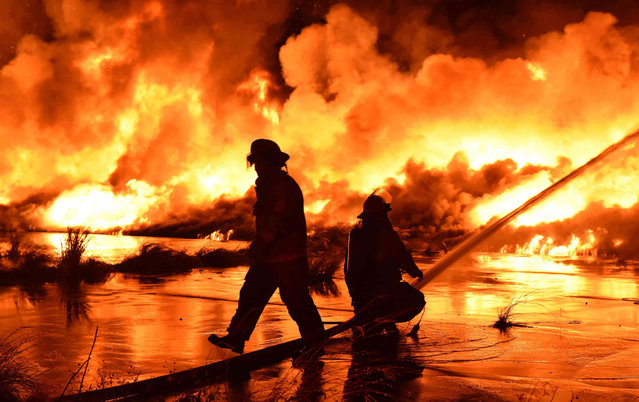 Firefighters work on a fire burning at the former Market Street Wharf early Sunday, October 17, 2021, in New Orleans. The remains of an abandoned river wharf went up in flames over the weekend in New Orleans as fireworks went off nearby, but officials haven’t yet determined whether the display played a role in the enormous fire. (Photo by Chief C. Mickal/New Orleans Fire Department Photo Unit via AP Photo) An East Pacific green sea turtle comes up for air as kayaker pass by in La Jolla Cove on October 17, 2021. A small colony of turtles have settled in the area. The turtles appear to be in the 5- to 15-year-old range and eat sea grasses and algae. (Photo by K.C. Alfred/ZUMA Press Wire/Rex Features/Shutterstock) 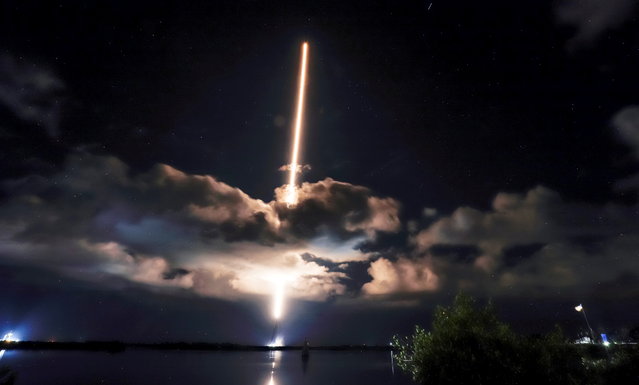 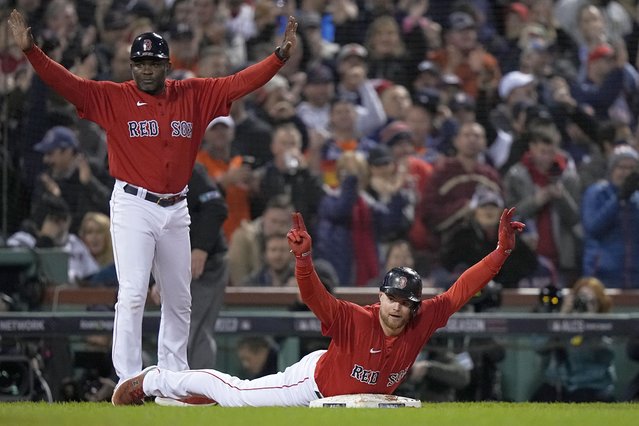 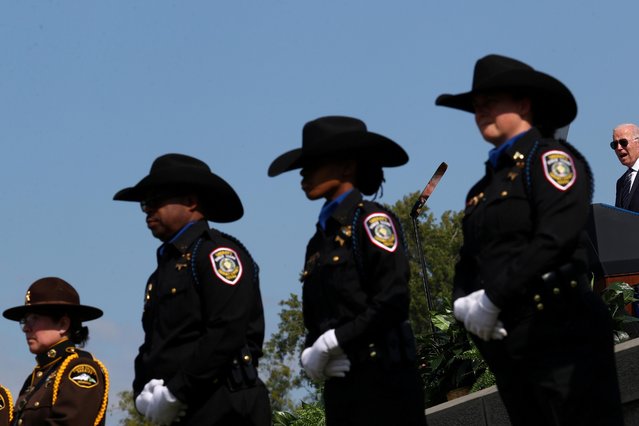 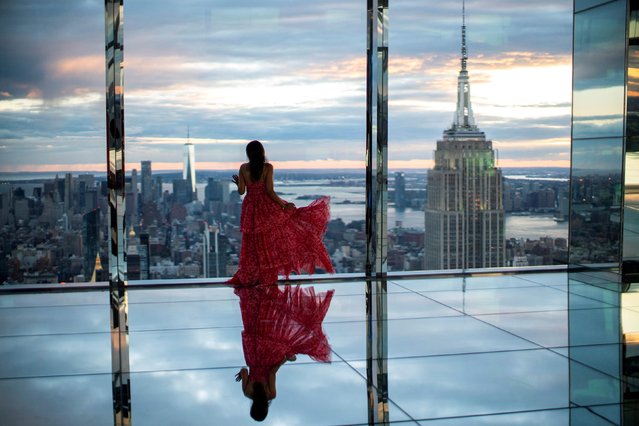 A woman looks at The Empire State Building and the New York Skyline during a preview of SUMMIT One Vanderbilt observation deck, which is spread across the top four floors of the new One Vanderbilt tower in Midtown Manhattan, in New York City, New York, U.S., October 18, 2021. (Photo by Eduardo Munoz/Reuters) 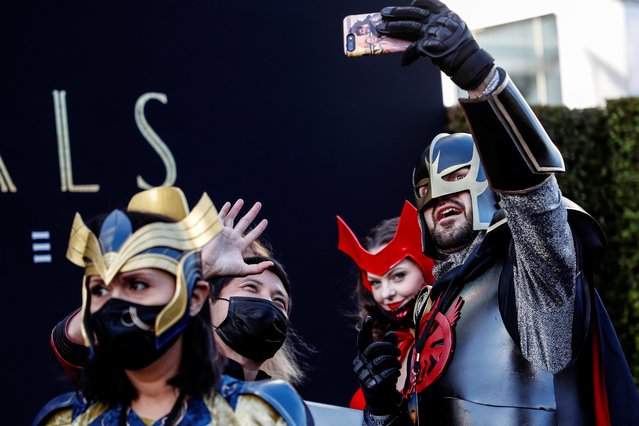 Costumed fans pose for photos ahead of the premiere for the film “Eternals” in Los Angeles, California, U.S. October 18, 2021. (Photo by Mario Anzuoni/Reuters) 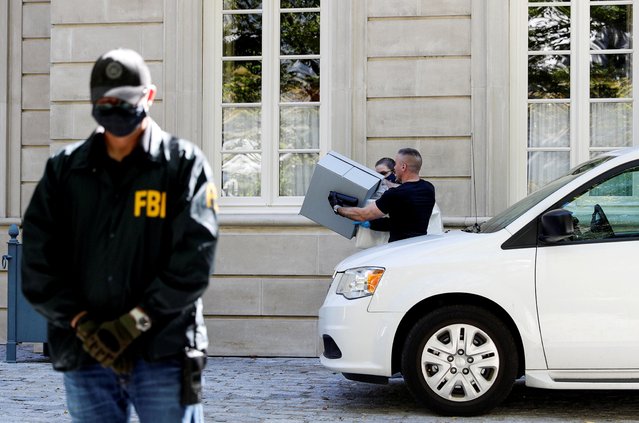 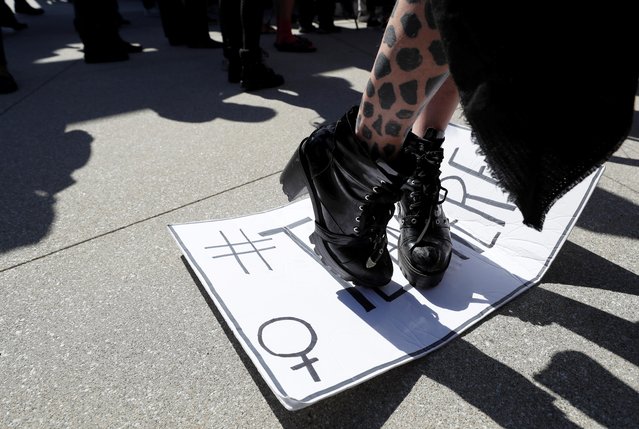 An activist stands on the counter protesters’ placard during a rally in support of the Netflix transgender employee walkout “Stand Up in Solidarity” to protest the streaming of comedian Dave Chappelle’s new comedy special, in Los Angeles, California, U.S. October 20 2021. (Photo by Mario Anzuoni/Reuters) 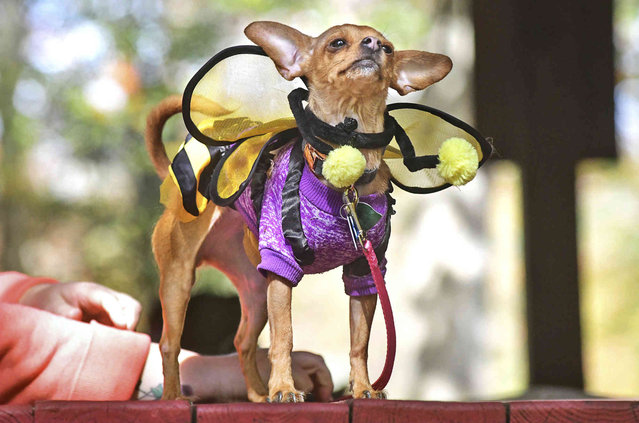 Peanut, a Chorkie, shows off her bumble bee costume at a “Pet Trick or Treat” event held at Windber Recreational Park in Windber, Pa. on Sunday, October 17, 2021. Peanut is owned by April McDonald of Twin Rocks, Pa. The afternoon’s activities were sponsored by Spangler Subaru in coordination with the Humane Society of Cambria County. (Photo by Thomas Slusser/The Tribune-Democrat via AP Photo) 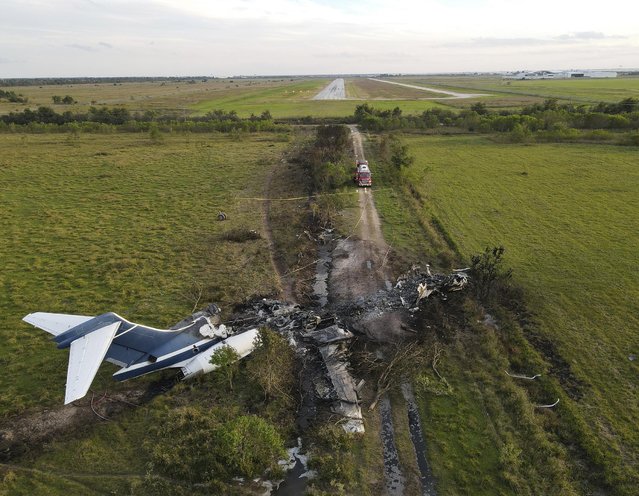 The remnants of an aircraft, which caught fire soon after a failed take-off attempt at Houston Executive Airport, are seen just north of Morton Road on Tuesday, October 19, 2021, in Brookshire. Texas. (Photo by Godofredo A. Vásquez/Houston Chronicle via AP Photo) 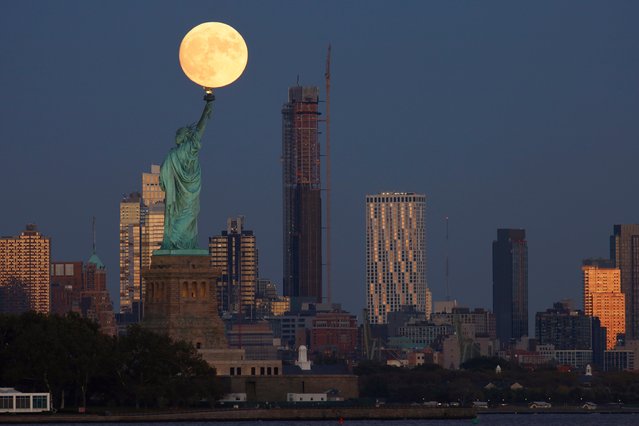 The Hunter’s Moon rises at a size of 99.6 percent behind Statue of Liberty and 9 DeKalb Avenue on the skyline of Brooklyn as the sun sets in New York City on October 19, 2021 as seen from Jersey City, New Jersey. (Photo by Gary Hershorn/Getty Images) 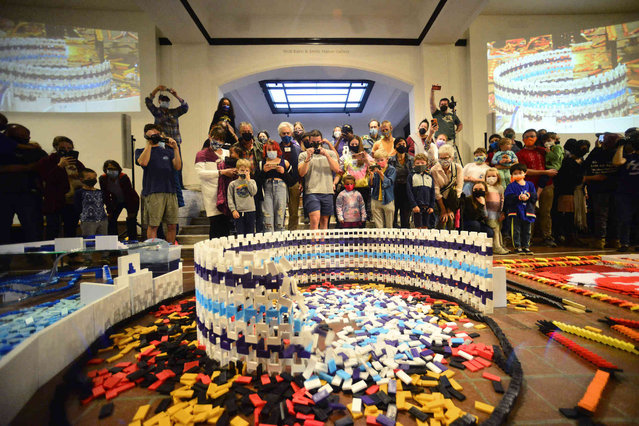 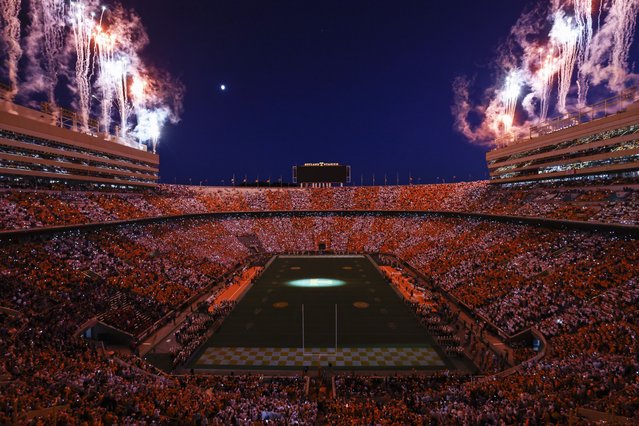 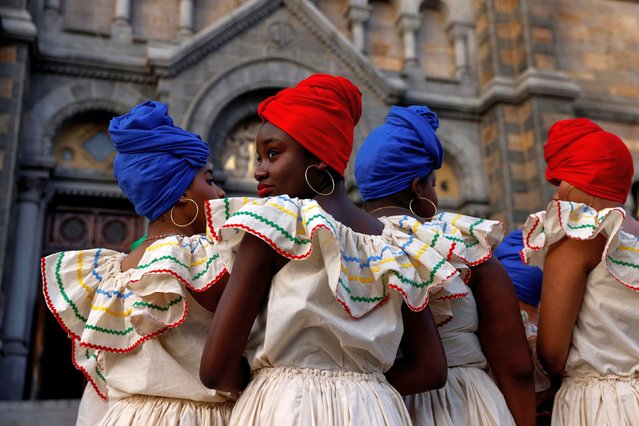 Members of a Haitian dance group wait to perform during the first of an annual community event since the coronavirus disease (COVID-19) pandemic, outside the Basilica and Shrine of Our Lady of Perpetual Help in the Mission Hill neighborhood of Boston, Massachusetts, U.S., October 16, 2021. (Photo by Shannon Stapleton/Reuters) 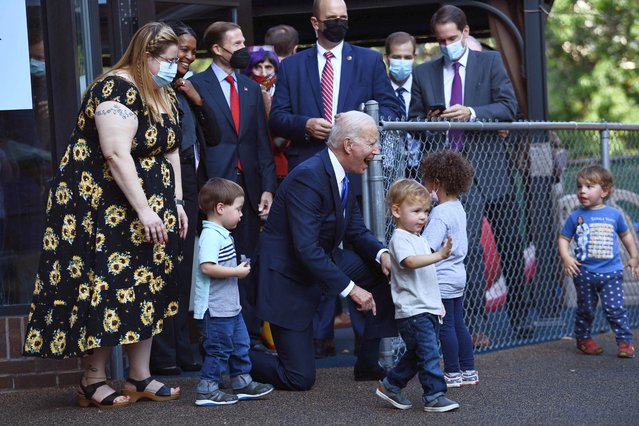 US President Joe Biden is greeted by children at the Capitol Child Development Center in Hartford, Connecticut, on October 15, 2021. Biden is in Hartford to promote his Build Back Better Agenda, highlighting the importance of investing in child care. (Photo by Brendan Smialowski/AFP Photo) 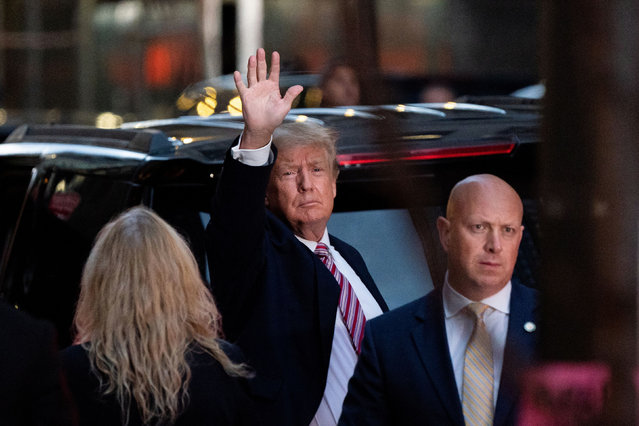 Former U.S. President Donald Trump acknowledges people as he gets in his SUV outside Trump Tower in the Manhattan borough of New York City, New York, U.S., October 18, 2021. (Photo by Jeenah Moon/Reuters) 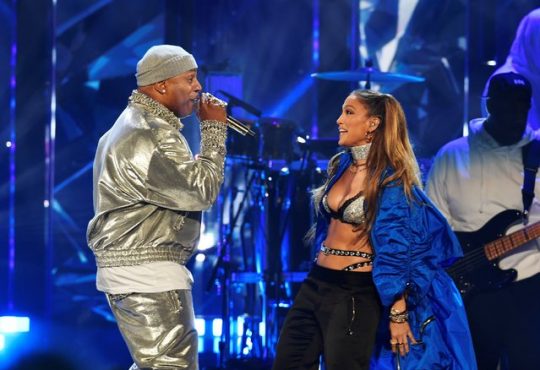 A Look at Life in Pakistan