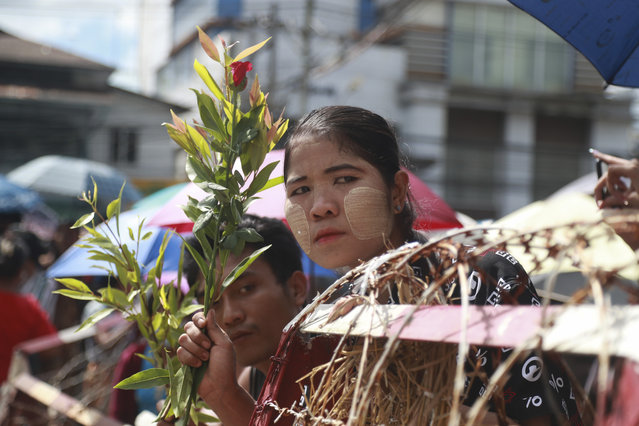 Family members and friends wait to welcome released prisoners outside the Insein Prison Tuesday, October 19, 2021, in Yangon, Myanmar. Myanmar’s government on Monday announced an amnesty for thousands of prisoners arrested for taking part in anti-government activities following February’s seizure of power by the military. (Photo by AP Photo/Stringer) 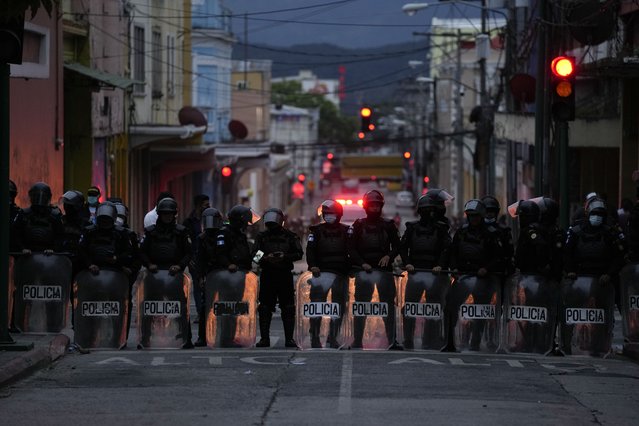 Riot police form a cordon against a group of veterans demanding that a law be passed that compensates them for having served during the country’s civil war, outside the Congress building in Guatemala City, Tuesday, October 19, 2021. (Photo by Moises Castillo/AP Photo) 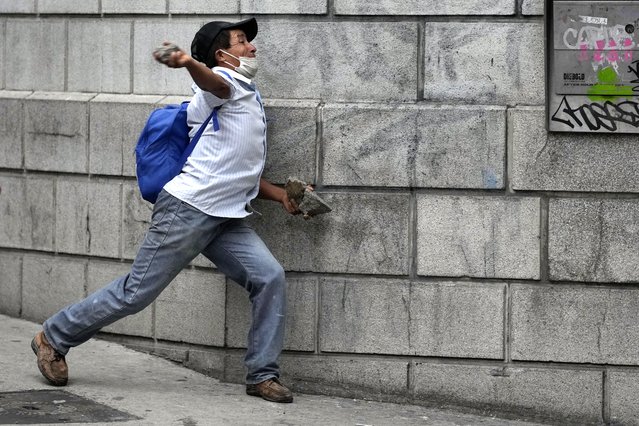 A protester throws a rock at riot police during a protest demanding that a law be passed that compensates veterans for having served during the country’s civil war, outside the Congress building in Guatemala City, Tuesday, October 19, 2021. (Photo by Moises Castillo/AP Photo) 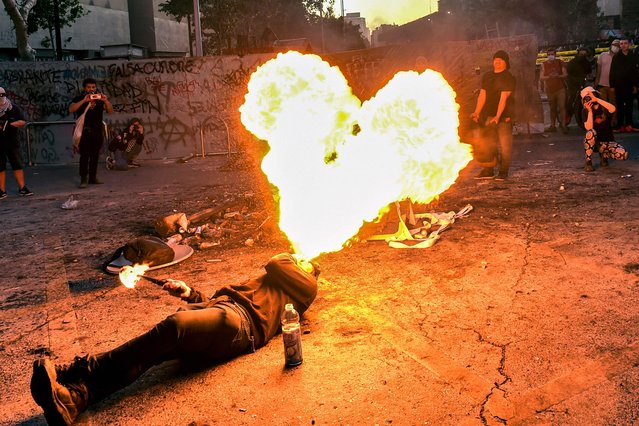 A protester spits fire during a protest to mark the second anniversary of months of civil unrising against social inequality, in Santiago, on October 18, 2021. The social-justice protests that rocked Chile in October 2019 led ultimately to the decision to create a new constitutional convention to draft a constitution to replace the one written during the dictatorship of Augusto Pinochet (1973-1990). The new 155-member the new body is in charge of writing a new constitution meant to pry power from the hands of the elite and spread it more equitably in the South American nation. (Photo by Martin Bernetti/AFP Photo) 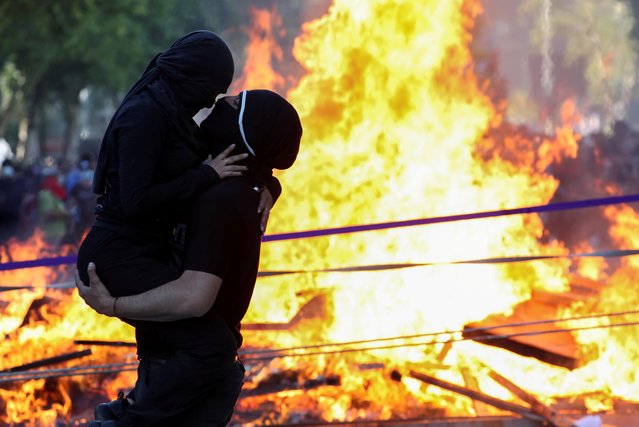 Demonstrators embrace during a protest against Chile’s government on the second anniversary of the protests and riots that rocked the capital in 2019, in Santiago, Chile, October 18, 2021. (Photo by Ivan Alvarado/Reuters) 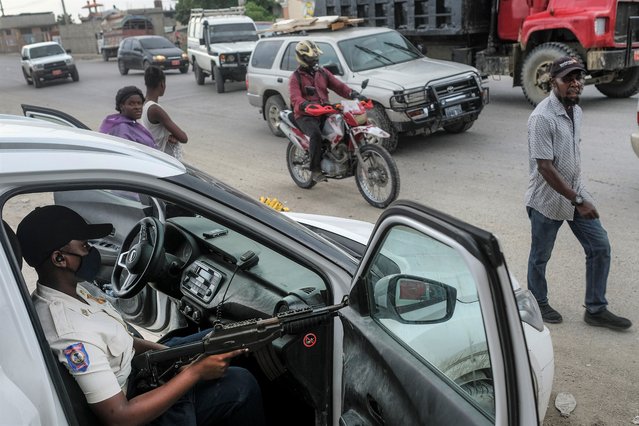 A police officer patrols the street of Croix-des-Bouquets, near Port-au-Prince, Haiti, Tuesday, October 19, 2021. A general strike continues in Haiti demanding that authorities address the nation’s lack of security, four days after 17 members of a U.S.-based missionary group were abducted by a gang. (Photo by Matias Delacroix/AP Photo) 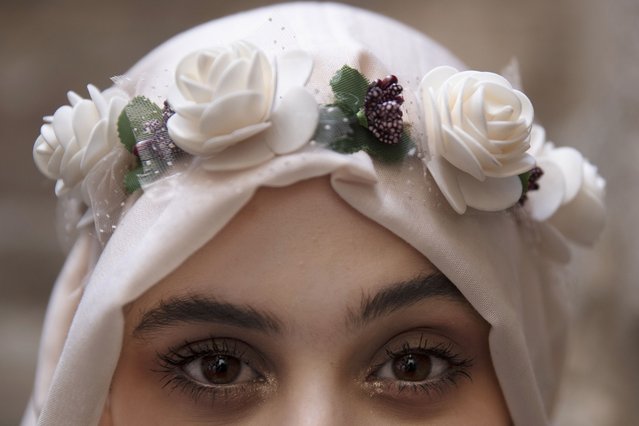 A young Palestinian woman wears a flower crown over her hijab and gold accents in her eye makeup in the Old City of Jerusalem on her way to prayers at the Al Aqsa Mosque compound marking Moulid al-Nabi, the birthday of the Prophet Muhammad, Tuesday, October 19, 2021. (Photo by Maya Alleruzzo/AP Photo) 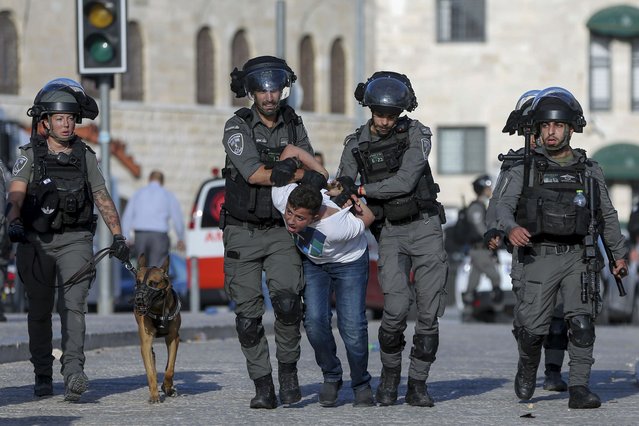 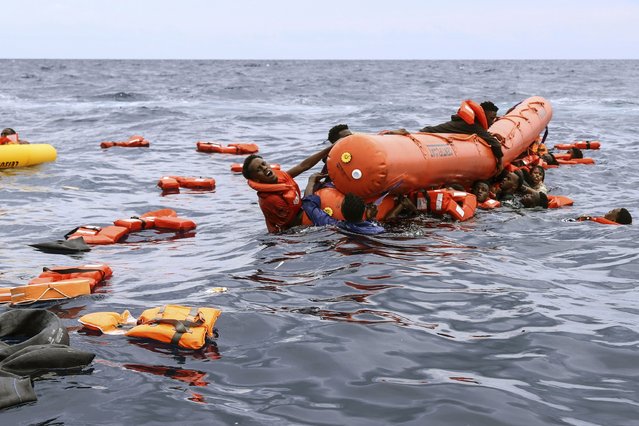 Migrants who were aboard a precarious rubber boat grab a centifloat while being rescued by a team of the Sea Watch-3, around 35 miles away from Libya, in Libyan SAR zone, Monday, October 18, 2021. (Photo by Valeria Mongelli/AP Photo) 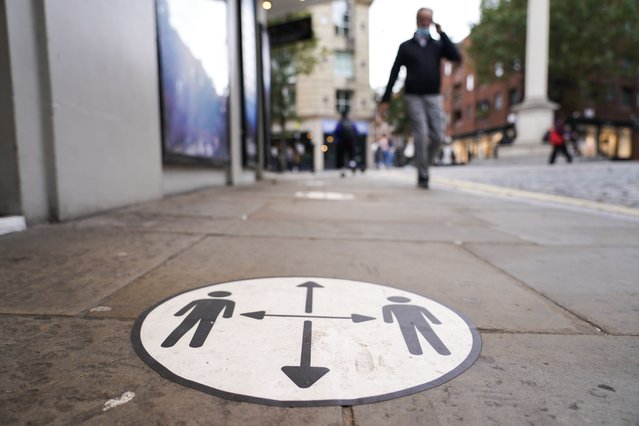 A man walks past a social distancing sign in the area of Covent Garden, in London, Tuesday, October 19, 2021. Many scientists are pressing the British government to re-impose social restrictions and speed up booster vaccinations as coronavirus infection rates, already Europe’s highest, rise once more. The U.K. recorded 49,156 new COVID-19 cases on Monday, Oct. 18, the largest number since mid-July. New infections averaged 43,000 a day over the past week, a 15% increase on the week before. (Photo by Alberto Pezzali/AP Photo) 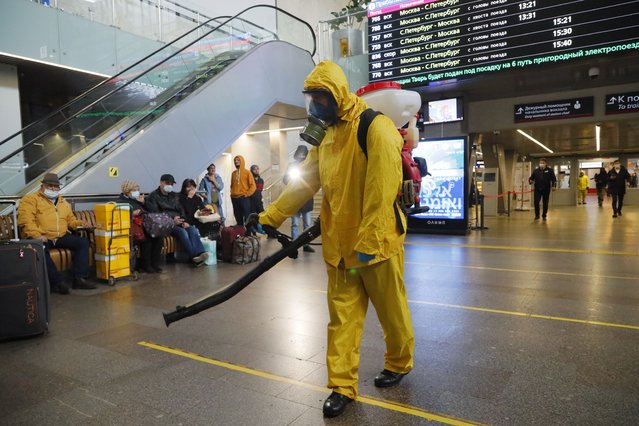 An employee of the Federal State Center for Special Risk Rescue Operations of Russia Emergency Situations disinfects Leningradsky railway station in Moscow, Russia, Tuesday, October 19, 2021. Russia registered another daily record of coronavirus deaths Tuesday as rapidly surging contagion raised pressure on the country’s health care system. The daily coronavirus mortality numbers have been surging for weeks and topped 1,000 for the first time over the weekend amid sluggish vaccination rates and the government’s reluctance to toughen restrictions. (Photo by Alexander Zemlianichenko Jr/AP Photo) 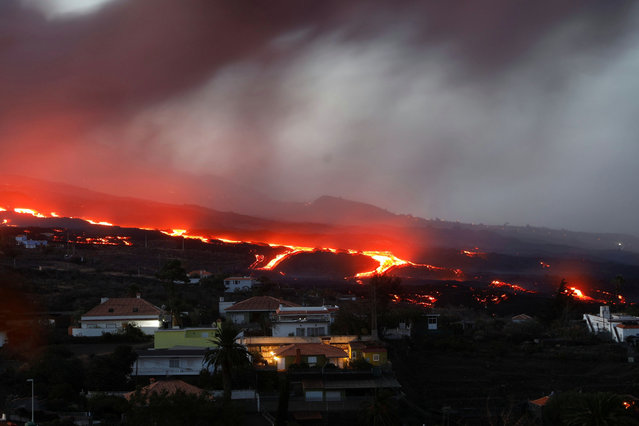 Lava from the Cumbre Vieja volcano flows as seen from Tajuya on the Canary Island of La Palma, Spain, October 19, 2021. (Photo by Susana Vera/Reuters) 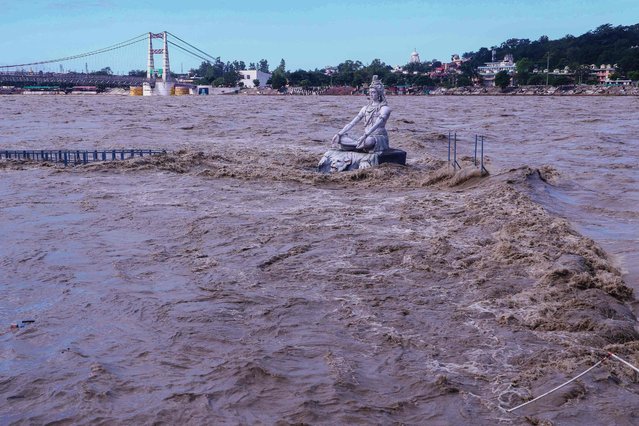 A statue of Hindu god Lord Shiva is pictured amid the risen water levels of River Ganga after incessant rains in Rishikesh in India’s Uttrakhand state on October 19, 2021. (Photo by AFP Photo/Stringer Network) 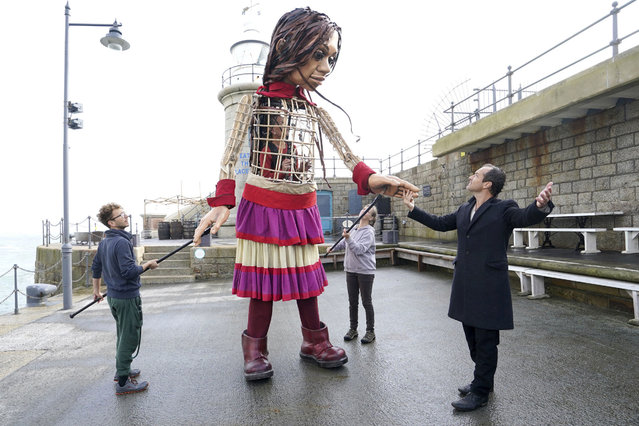 Actor Jude Law, right, looks at Little Amal, a 3.5-meter-tall puppet of a nine-year-old Syrian girl, as it arrives at Folkestone Beach, Kent, Tuesday, October 19, 2021 as part of the Handspring Puppet Company’s “The Walk”. The puppet started her journey in Turkey on 27 July and has travelled nearly 8,000 km across Greece, Italy, Germany, Switzerland, Belgium and France, symbolizing millions of displaced children. (Photo by Gareth Fuller/PA Wire via AP Photo) 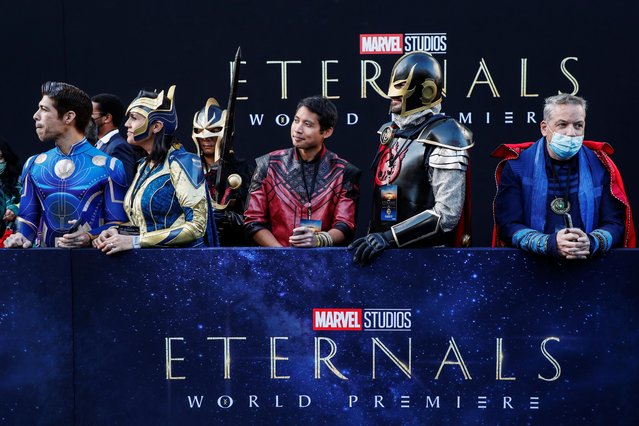 Costumed fans wait ahead of the premiere for the film “Eternals” in Los Angeles, California, U.S. on October 18, 2021. (Photo by Mario Anzuoni/Reuters) 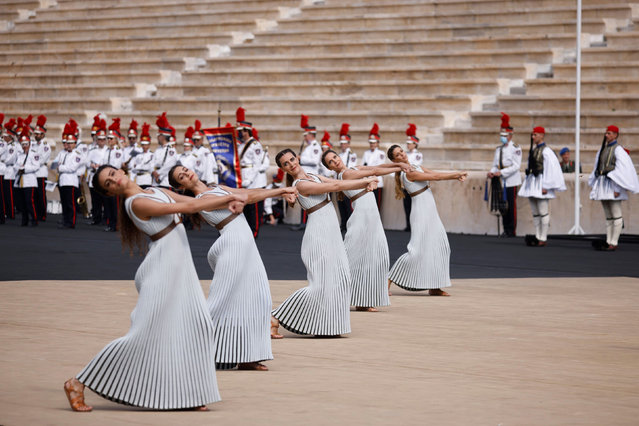 Actresses in the role of priestesses perform during the Olympic flame handover ceremony at Panathinean stadium in Athens on October 19, 2021. The flame will be transported by torch relay to Beijing, China, which will host the 2022 Winter Olympics from February 4-20, 2022. (Photo by Alkis Konstantinidis/Reuters) 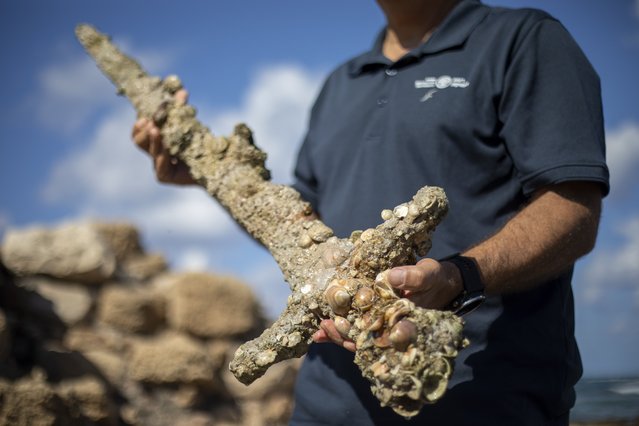 Jacob Sharvit, director of the Marine Archaeology Unit of the Israel Antiquities Authority, holds a meter-long (yard-long) sword, that experts say dates back to the Crusaders, in the Mediterranean seaport of Cesarea, Israel, Tuesday, October 19, 2021. The Authority said Monday a scuba diver was on a weekend dive in northern Israel when he spotted a trove of ancient artifacts that included anchors, pottery and the sword. (Photo by Ariel Schalit/AP Photo) 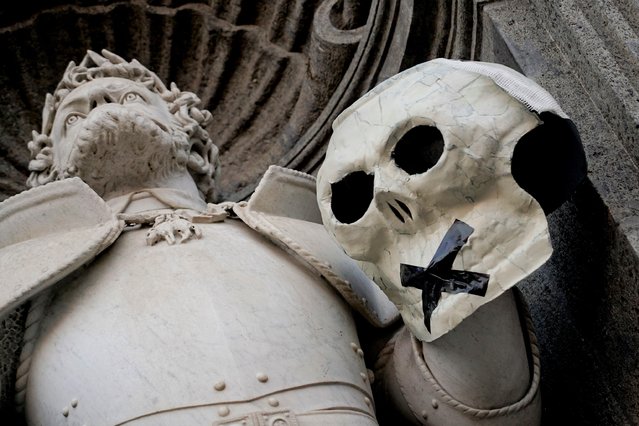 A view of one of several papier-mache skulls with an “X” made with black adhesive tape, placed by unknown people in the night over numerous statues of the city center of Naples, southern Italy, 19 October 2021. The night raid was not claimed by anyone. (Photo by Ciro Fusco/EPA/EFE)