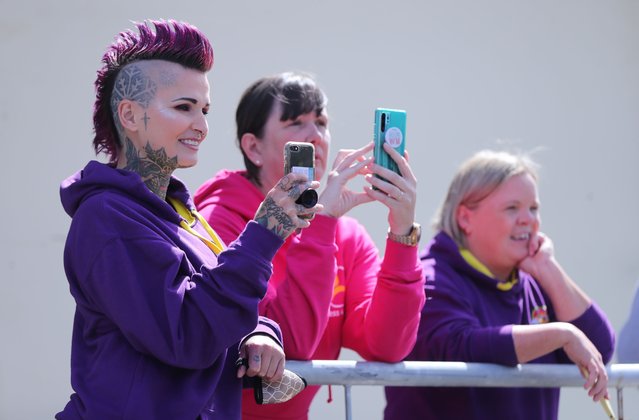 Onlookers take pictures of Camilla, Duchess of Cornwall during a visit to the Kilcooley Women’s Centre to meet staff and learn about the groups’ work from its members on May 19, 2021 in Bangor, Northern Ireland. (Photo by Niall Carson – WPA Pool/Getty Images) 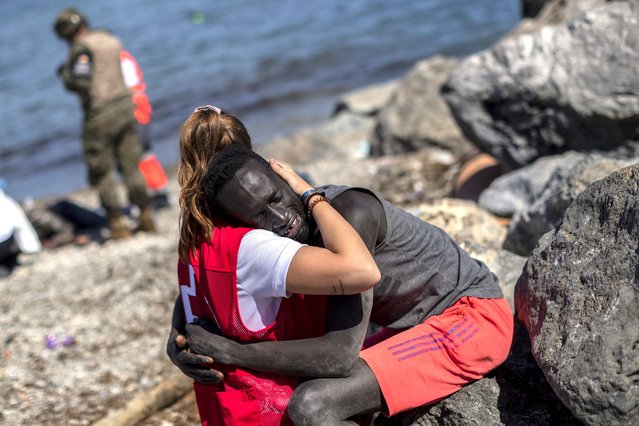 A migrant is comforted by a member of the Spanish Red Cross near the border of Morocco and Spain, at the Spanish enclave of Ceuta, on Tuesday, May 18, 2021. (Photo by Bernat Armangue/AP Photo) 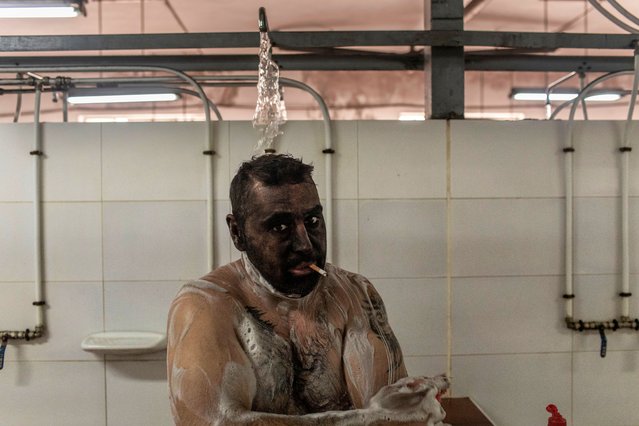 A miner smokes a cigar while showering at the end of his workday on May 10, 2021 in Mieres, Spain. The San Nicolas mine in Spain’s northern region of Asturias is the last working coal mine in Spain. At its peak around 2000 people were employed – today, some 200 people work there. (Photo by Manu Brabo/Getty Images) 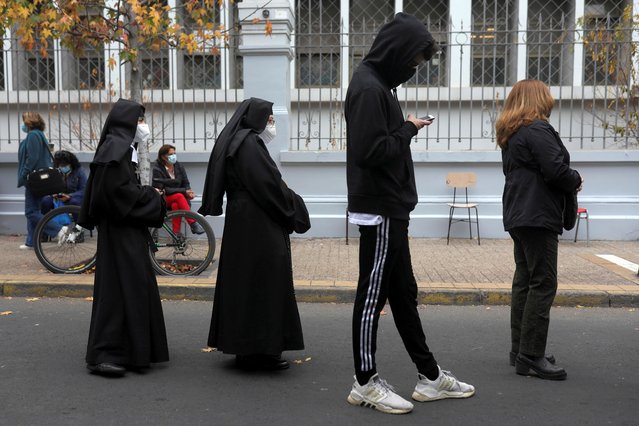 People queue to vote in the election for governors, mayors, councillors and constitutional assembly members to draft a new constitution to replace Chile’s charter, in Santiago, Chile, May 15, 2021. (Photo by Pablo Sanhueza/Reuters) 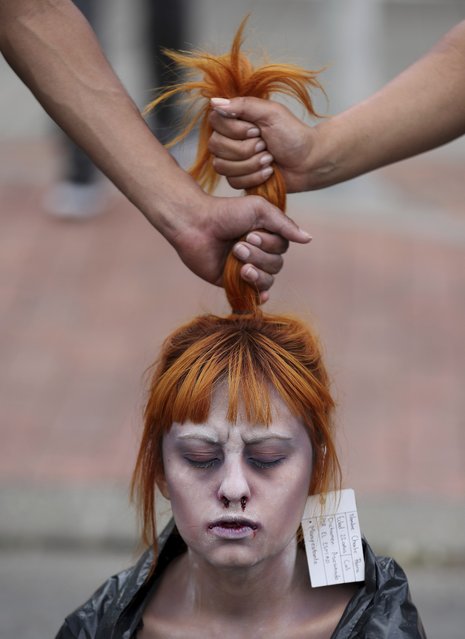 A young woman takes part in a street play depicting police brutality during an anti-government protest, in Bogota, Colombia, Saturday, May 15, 2021. Thousands of young people and college students have been at the forefront of Colombia’s anti-government protests for more than two weeks. (Photo by Fernando Vergara/AP Photo) 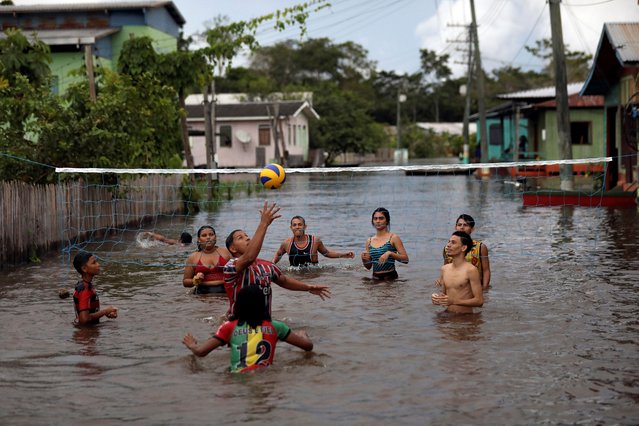 Residents play volleyball in a street flooded by the rising Solimoes river, one of the two main branches of the Amazon River, in Anama, Amazonas state, Brazil on May 14, 2021. (Photo by Bruno Kelly/Reuters) 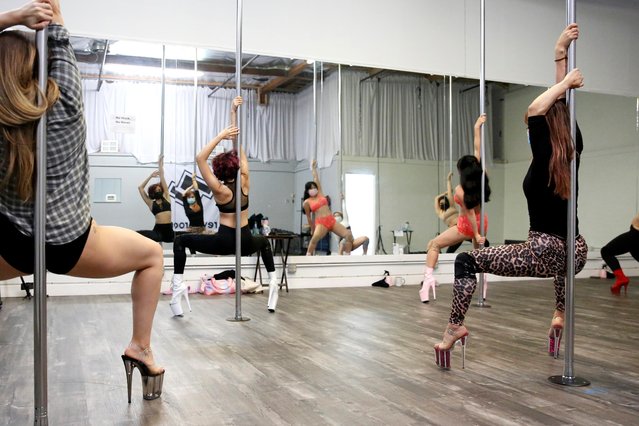 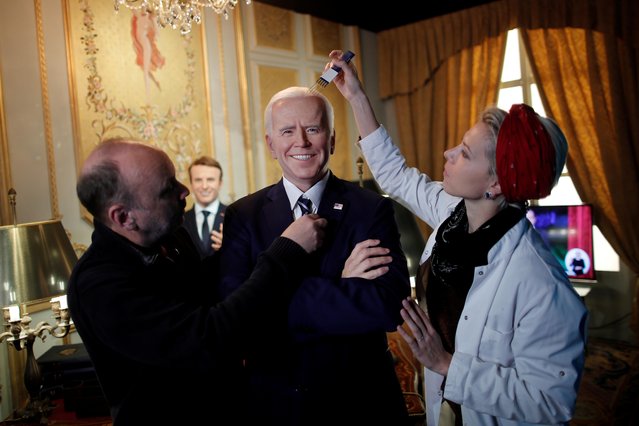 German sculptor Claus Velte and a gallery assistant retouch a waxwork of U.S. President Joe Biden at the Grevin museum, as it prepares to re-open to the public following the easing of coronavirus disease (COVID-19) restrictions in Paris, France, May 18, 2021. (Photo by Benoit Tessier/Reuters) 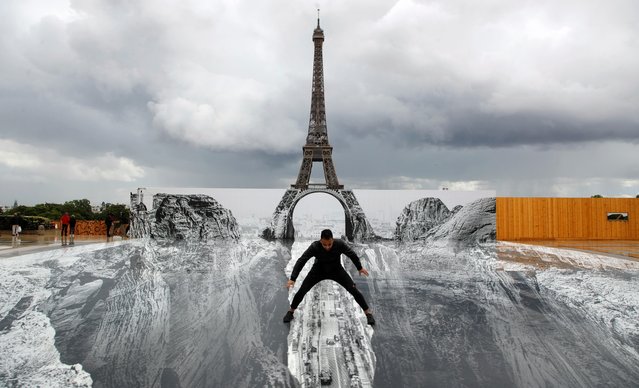 A man poses on a giant artwork by French artist JR installed on the Trocadero square in front of the Eiffel Tower in Paris, France, May 19, 2021. (Photo by Sarah Meyssonnier/Reuters) 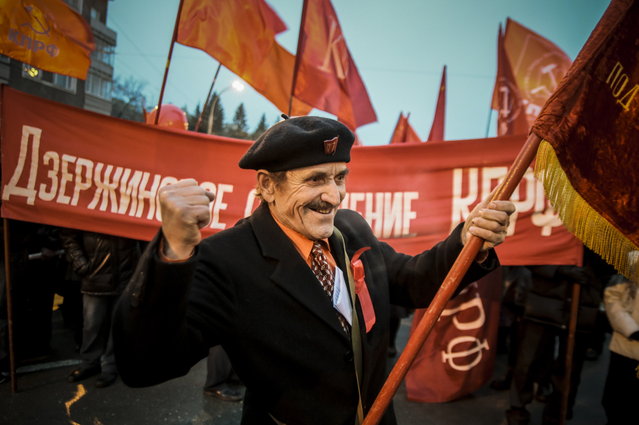 An elderly man participates in a rally by communist Russians marking the 97th anniversary of the Great October Socialist Revolution in Novosibirsk, Russia on November 7, 2014. (Photo by Yevgeny Kurskov/TASS via ZUMA Wire) 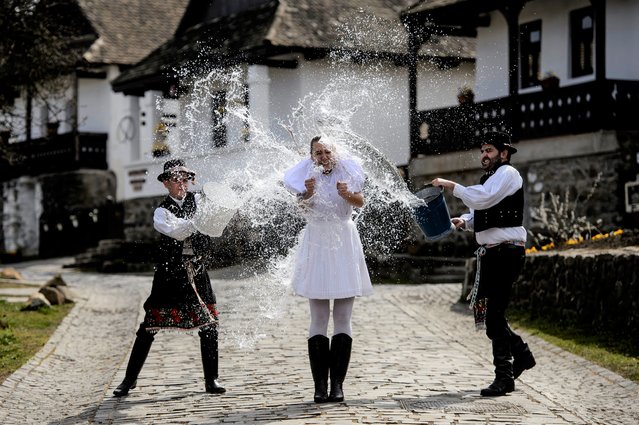 Dressed in folk costumes, young men pour water on young women in Holloko, a mountain village enlisted on the World Heritage List of Unesco, some 80 km northeast of Budapest, Hungary, 01 April 2021, during a press event. Holloko is famous for its traditional Easter celebrations but this year all the events have been cancelled due to the coronavirus. (Photo by Peter Komka/EPA/EFE) 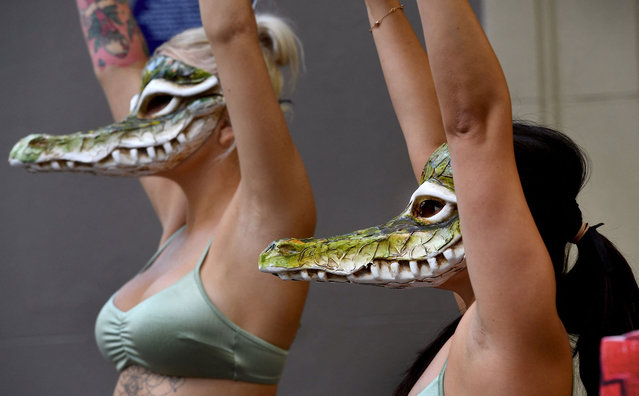 Activists from the animal rights group PETA, wearing bikinis and crocodile masks, stand outside a store of the French fashion label Hermes in Melbourne on March 16, 2021, to protest against their use of crocodile skins and the recent purchases by Hermes and LVMH of crocodile farms in Australia’s Northern Territory. (Photo by William West/AFP Photo) 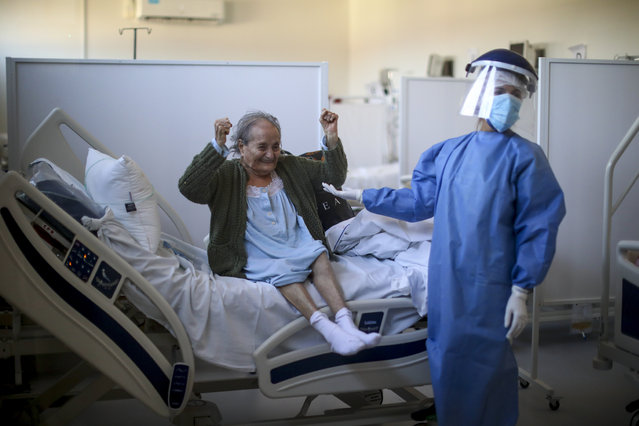 Blanca Ortiz, 84, celebrates after learning that she will be dismissed from the Eurnekian Ezeiza Hospital, on the outskirts of Buenos Aires, Argentina, Thursday, August 13, 2020, several weeks after being admitted with COVID-19. Photographer Natacha Pisarenko said the moment was one of the few she witnessed in months of covering COVID-19 in which doctors and nurses allowed themselves to feel joy. “The moment made all of us in the room with her laugh and feel hopeful again”, Pisarenko said. “It was the brightest moment for me while covering such a heavy story”. (Photo by Natacha Pisarenko/AP Photo) 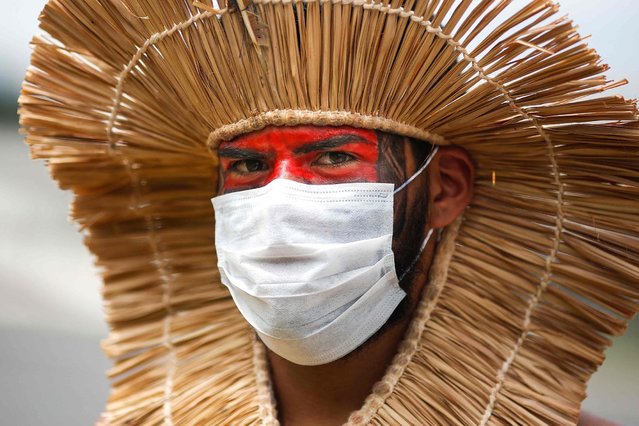 An indigenous man wears a protective mask during a protest against President Jair Bolsonaro’s mining politics regarding indigenous lands, and demanding Brazilian Environment Minister Ricardo Salles’ resignation, outside the Ministry of the Environment building in Brasilia on April 20, 2021, amid the COVID-19 pandemic. (Photo by Sergio Lima/AFP Photo) 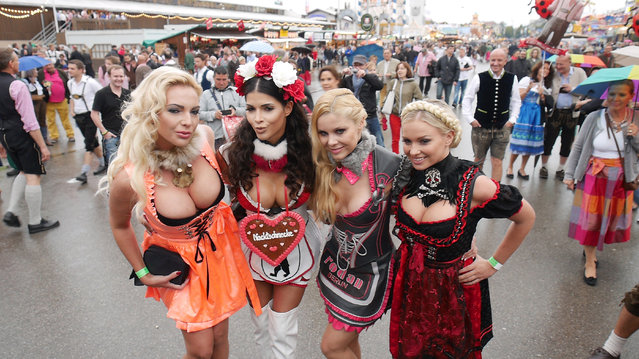 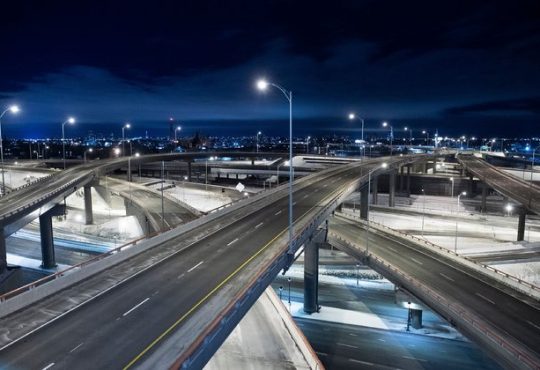 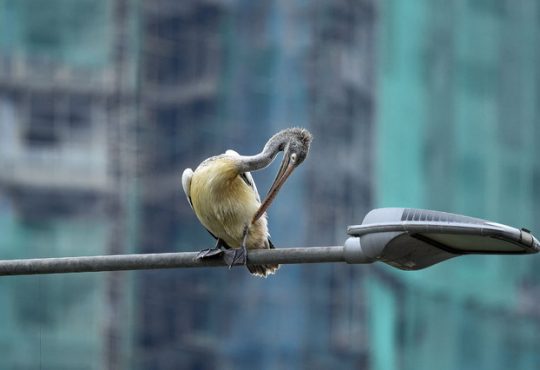 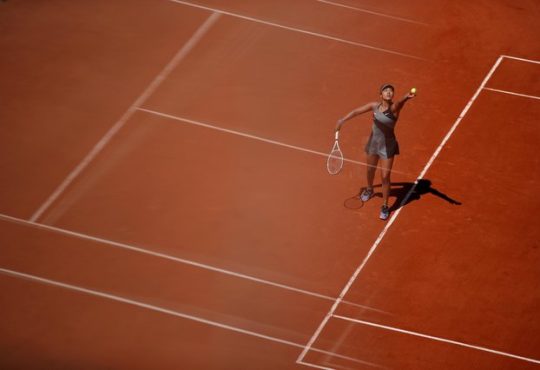 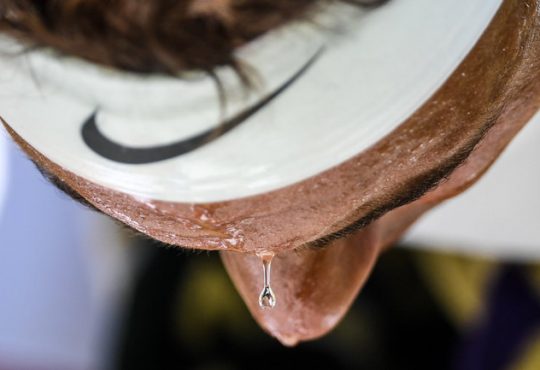 Markets around the World 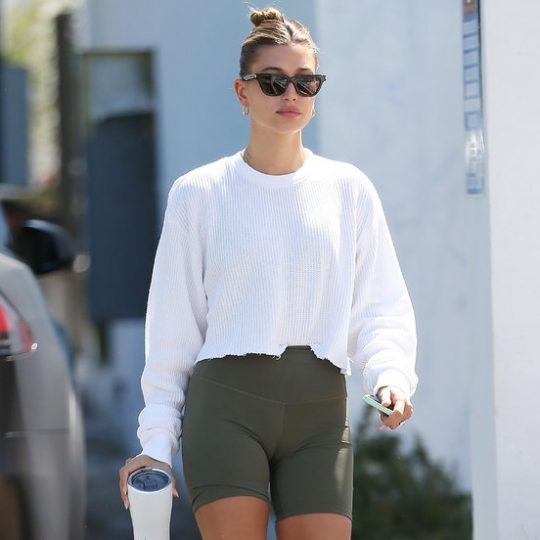 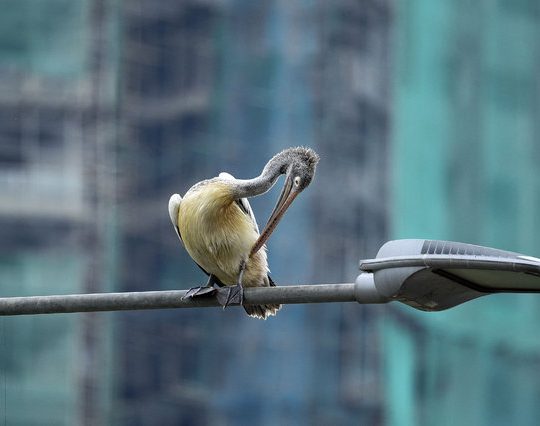